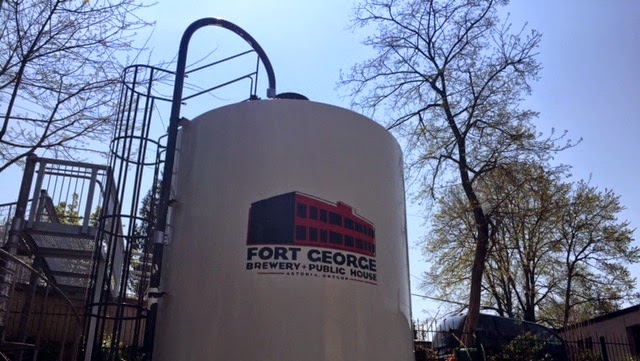 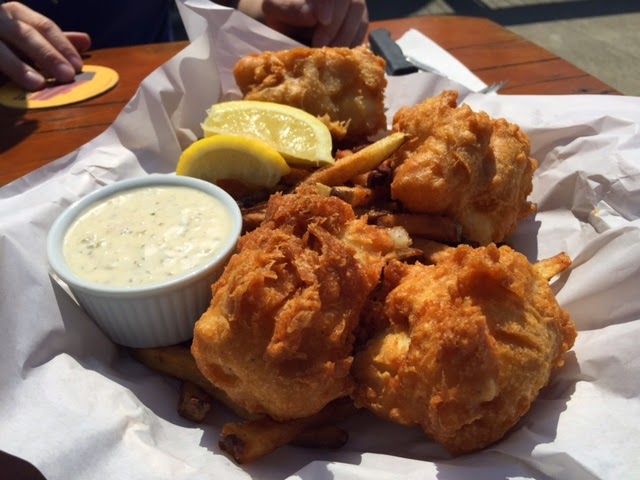 Hanging out in the "other" Astoria this past weekend was a total blast, as Dan and I once again made our way to the Oregon Coast.  Astoria has been on my must list for a while for obvious reasons but also because I heard it's a great town with lots of cool sights, shops and culinary treats.  There's also lots of breweries around such as Fort George, where Dan and I had the pleasure to lunch.

Atmosphere:
Set a few blocks down from the waterfront, Dan and I happened upon Fort George just by chance, as we turned back from the way-too-long line at Bowpicker Fish & Chips.  The brewery was nearby, located on Duane Street, just a few short blocks from Astoria's main "Downtown" area and waterfront.  We chose it mainly because they offered outdoor seating since we had Moses & Sonya's dog Bond with us too.

Enjoying the sunshine, the outdoor area was spacious and relaxing and we noticed other couples and parties like us enjoying the day with their four-legged friends.  I also had the chance to peek inside and it was great, adorning a salvaged type of feel with reclaimed wooden stools, a lovely handcrafted bar and tons of local artwork on the walls.

Beer and Food:
Even though I must admit that I didn't try the beer, Dan seemed to love his Optimist IPA, served in a sizable mason jar, describing it as hoppy, floral and delicious.

Fish and Chips - Since I had a major hankering for fish and chips, the fact they served it was a big draw for me.  A little skeptical about how it'd turn out at a brewery versus a traditional fish shack such as the aforementioned Bowpicker, I was pleasantly surprised and dare I even say, blown away?  Using beautiful pieces of Alaskan Cod, the fish was battered well, revealing a milky white middle which flaked off perfectly.  A chunky, homemade tartar sauce sealed the deal for me, which I used vehemently on fries as well as the fish.

Buffalo Wings - Although the aforementioned dish was large and enough to share between two people, IMO, Dan also wanted to try the wings.  I didn't mind, as I'm always up for a basket of chicken wings and Fort George's version delivered.  Crispy on the outside and fleshy on the inside, they were substantial pieces and a little bit went a long way.  Paired with your usual suspects such as fresh celery, carrots and ranch dressing, I think this was an overall solid app, which was again nice for sharing.

Service and Cost:
Impressed with the pleasant service, I thought our waitress did a great job, especially given the lovely day outside and therefore the outdoor area being so crowded.  Everything came out relatively quickly and we felt very well taken care of, despite the fact that one waitress seemed to be in charge of multiple tables.

Costs are moderate and we walked away paying less than $40 for the two aforementioned dishes, a beer and a single oyster shooter.  Nothing to sneeze at!