Winegasm - An Out of Body Experience 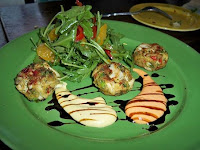 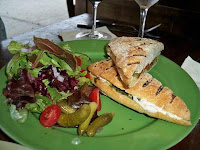 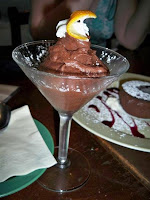 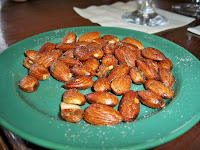 Winegasm - 31-86 37th Street, Astoria NY 11103
718.932.3331
N/W Train to Broadway
www.winegasmeatery.com
My colleague Joey and I checked out Winegasm back in May and just this week, I returned there with my other two Joey in Astoria colleagues Meg and Sooz. We were generously invited to an informal tasting by Winegasm's owners. It was a fun night filled with laughter, delicious food and incredible wine. While I'm going to concentrate on the food here, my colleagues will cover the wine in a later posting.
We couldn't have survived the night without Winegasm's delicious grub--both because of its wonderful flavor but also because we needed sustenance to hold us over from the wine. Here are some of the things we sampled:
Spicy Almonds - In addition to having a nice kick from spices, these almonds were served warm. They were a delight to bite into, as you could taste their natural oil coming out--and the spices provided a cheerful greeting for the tongue. It's a good starter that's nice with both whites and reds.
Gasm Dip - This caught Meg's eye immediately and it consisted of a puree of beans, carrots and truffle oil with melba chips. It was tasty but definitely not my favorite thing here--partly because of the strange flavoring. I thought that I tasted tarragon or some sort of licorice spice, which I wasn't a fan of. Meg and I were saying that we prefer the carrot dip at Mundo.
Bacon Wrapped Prunes - This sounded amazing on the menu and it's one of my standouts of the night. The exterior was crunchy, smoky and salty from the bacon while the inside was ooey, gooey and sweet from the prunes. It tasted like a dessert and a tapa in one! I highly recommend it, especially if you're drinking red wine.
7 Cheese Mac with Country Bacon - This dish spoke to us from the beginning since the three of us love bacon. While it was presented beautifully in a rustic ceramic dish, we were surprised to see that the bacon was placed on top in large strips, as opposed to being cut up into small pieces and interspersed into the mac. But once we tasted it, the bacon faux pas was quickly forgotten. The mac was crunchy on top, smooth and rich on the inside. It didn't feel heavy as it often could--probably because it was split between three people. In the end, it was kind of fun to break up the bacon into smaller pieces and to place it on top of each forkful of mac.
Mozarella, Sun-Dried Tomato, Arugula and Pesto Panini - This hard-to-mess-up sandwich was another home run at Winegasm. The bread was fluffy and fresh and so were the inside ingredients. It was paired well with a mixed green salad and adorable, crunchy cornishons. Although we agreed that it was no Il Bambino, it held its own and I'd certainly get it again.
Fresh Crab Cakes with Arugula Salad - These were suggested by Winegasm and we absolutely devoured them--the crabmeat was super fresh and flavored with lemony parsley and red peppers. The crab cakes were bite sized and their flavor was enhanced when dipped into the spicy mayo and vinaigrette dip. The arugula salad was a nice touch too, providing zest and freshness to the dish.
Molten Lava Cake and Orange Chocolate Mousse - We needed to cap off our night with something sweet and chocolatey so we selected these two favorites. Both were amazing and beautifully presented. The Molten Lava cake was garnished with silky raspberry sauce--it was so soft and rich inside that we had to switch off between that and the mousse. The mousse was also fabulous, with a tart orange flavor from the Grand Marnier. It was garnished elegantly with orange peel and creme fraische. Both desserts were beautiful, decadent dishes that should be tried at least once.
Service and Cost:
The service was superb--mainly because they knew we were coming but even despite this bias, the staff seems to know what they're doing and their passion for Winegasm shines through. We were given tons of wonderful pairing suggestions and even some brief histories of wine, which were informative and interesting. If you'd like to find out more, check out their Thursday night wine tastings from 7-9p.
Winegasm's costs are reasonable and range between $3.50-$8.50 for appetizers, $6.95-$11.95 for paninis and $7.95 - $21.95 for main dishes. Wine is offered by the glass, $7-$14 or by the bottle, $25-$99.
3 Mmmms
Posted by Fooditka