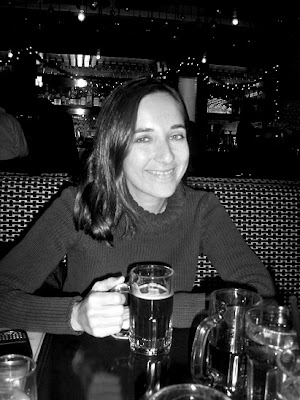 Loyal Foodista readers know that I frequent 5 Napkin Burger on a regular basis, loving their signature namesake burger, The 5 Napkin.  But veering from the usual, Dan and I recently attended a special dinner, hosted by Captain Lawrence beer, where five types of beers were paired with our beloved 5 Napkin food staples.
﻿
The evening was organized quite well in that it started as a mix and mingle during cocktail hour, where we got acquainted with fellow diners as well as some of Astoria's well known bloggers such as Ran from Why Leave Astoria?! and Bradley from Amuse Bouche blog.  We also met Scott Vaccaro, the passionate owner of Captain Lawrence Brewing Company, who personally introduced himself to everyone and said a few words about each beer.

Unlike I usually do, I'm going to concentrate this post more on beer rather than the food, which I've gone into before and which you know I think is delicious.

Beer 1: Special 5 Napkin Burger Sour Blend - The first gulp of this genuinely sour ale raised my eyebrows all the way up to my hairline.  "What on earth is that?!," I exclaimed to my friends.  The taste was sour and a little yeastie, making me grimace in a strange way (see below picture).  But after taking a couple more adventurous gulps, I began to really like this beer. I appreciated it.  Scott revealed that it's aged in wine barrels with cherries, which after I thought about it, I did taste it on my palate after each glug.  Very, very interesting. 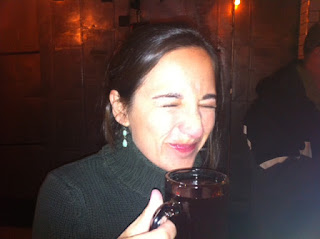 Beer 2: Xtra Gold - This second beer was more of what we were used to, lighter in color, resembling a Belgian ale.  It was actually a blend of Belgian tripel (a strong pale ale) and American IPA that had a hint of bitterness and some fruitiness too.  The beer's strength definitely stood up to 5 Napkin's signature nibbles such as deep fried pickles and pastrami, lamb kofta skewers with tangy tzatziki sauce and others.

Beer 3: Captain's Reserve IPA - A full-bodied beer with a touch of citrus and pine, it was served alongside a grilled shrimp salad that boasted a spicy bite from a chipotle mayo sauce.  The beer was wonderfully thick and helped absorb some of the sharpness in the salad.  I'd say that it had a more masculine taste.
Beer 4: Smoked Porter - I absolutely loved putting my nose up to this almost pitch black beer, which smelled exactly like my favorite food, bacon.  After asking Scott about it, he confirmed my suspicion and I took a nice big gulp, which was followed-up with a hearty bite of 5 Napkin's Italian turkey burger.  Similar to its aroma, the beer tasted smoky, rich and almost licoricey.

Beer 5: St. Vincents - Another blend, this one paired nicely with our last course, consisting of rich, buttery peanut butter cookies.  A combination of U.S. and Belgian barley, this beer was once again hearty, dark and malty.  I found out that it's aged at least a year, and released on Father's Day in honor of Scott's father, Vince.

If you're curious to try any of the beers I just described, head over to 5 Napkin Burger, as they still have them available.  In addition to these, they also have Captain Lawrence Pumpkin Ale, which should be lovely to drink in this cold weather.