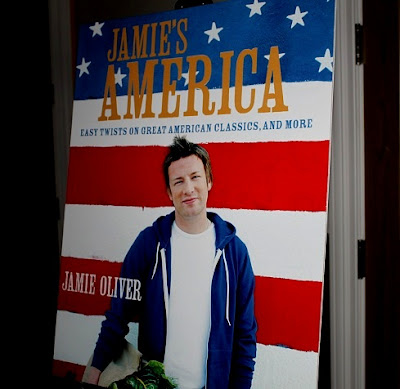 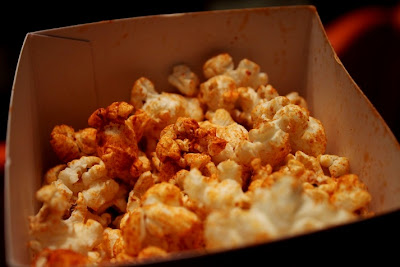 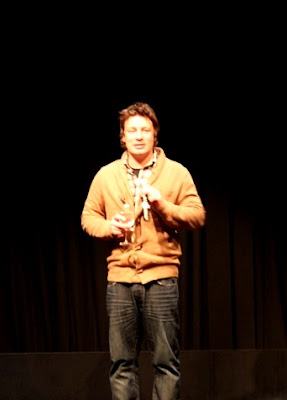 Jamie Oliver (aka The Naked Chef) ﻿happens to be a favorite of mine.  Even though his style of cooking can sometimes get messy, I think that's what makes him so great (and so real).  Already owning his Italian cookbook, Jamie's Italy, which I've used on occasion, I was excited to find out that he just came out with a new one called Jamie's America.
I was delighted to hear about this and even more happy when I was invited to a sneak peek screening of Jamie's new upcoming show, Jamie's American Roadtrip, which will launch in the U.S. next year.  Based on his adventures to several culinarily-rich American cities, which inspired Jamie's newest cookbook, the series highlights each city and the everyday people that build its food heritage.

Now, I'll give you some highlights from the event, during which Jamie actually came out in person and answered questions from the audience.  It was fun to see him in the flesh and I loved having the opportunity to converse with him.

The Locale:
I was impressed by the location for this screening, held in a small, boutique hotel in SOHO called the Crosby Street Hotel.  The funky decor, including modern wall art by Peter Rocklin and some of the most strangely unique sculptures, made me stop and take in my surroundings.  I thought that the individuality of this hotel lent itself perfectly for this under-the-radar event.

The actual screening room was held one level below the lobby in a private event space with its own bar.  I enjoyed the dimly lit atmosphere and the prosecco that was passed around.  When we entered the screening room and got to sink into its cushy, leather orange chairs, we also received a creative popcorn snack to munch on.

Food:
We received two snacks during the course of this event - Chipotle Chile Popcorn during the screening and Chocolate Rocky Road bark to take home.  Both foods came from Jamie's new cookbook and they elevated traditional snack food to the next level.

Chipotle Chile Pocorn - Not your ordinary popcorn, the recipe for this was inspired by Jamie's visit to Arizona.  Spiced up with some fiery chili powder, it gave this snack an injection of sharpness.  I loved the popcorn's kicked-up flavor and both Bo and I kept reaching for big handfuls, finishing our entire portion.  It also has to be noted that the popcorn wasn't overly salty, which was certainly a plus.
Chocolate Rocky Road - Originating from Jamie's Los Angeles adventure, this chocolate snack was also a spruced up version of a classic.  Incorporating a hint of spice from fresh red chiles, as well as sweet flavors from dried fruit such as golden raisins and cranberries, and different types of nuts, the bark was an interesting hybrid between a dessert and a hearty snack.

The Host:
As I already hinted above, Jamie came out towards the end of the program to answer any and all of our questions.  Since the program has a great message - exploring and appreciating the often hidden traditions behind American food - his answers were heartfelt and a little serious.  For this reason, I asked him a humorous question to lighten the mood, and I'll give you a sampling of his responses through my videos:
Video 1 - Getting under the skin of American food culture
Video 2 - Eating a psychedelic vegetable at the market
Video 3 - Giving his perspective about what his kids think about what he does
Video 4 - The beauty of family food across America

If you're curious about Jamie's recipes and the foods I mentioned above, check out Jamie's America

and experience it for yourself.
Posted by Fooditka