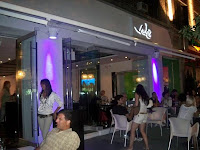 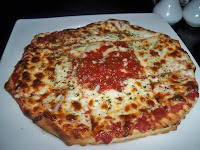 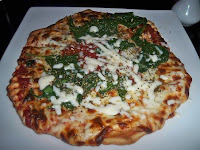 Balu - 37-11 30th Avenue, Astoria NY 11103
718.626.2258
N/W Train to 30th Avenue
Margot suggested trying Balu this week, the newly opened Med cafe on 30th Avenue. I've seen it under construction but didn't know that it finally opened. We checked it out on Tuesday and while the atmosphere impressed us, the food was nothing to brag about.
Atmosphere:
The first thing that popped into my head when seeing Balu was Miami. Everything was white, drapy and soft looking--it had that summery/tropical feel that I love. Even the staff wore white from head to toe.

There's a large outdoor seating area, which is covered by a big, (you guessed it)...white canopy or you can choose to sit inside. To the right, you'll notice a wall with moving water backed by a fish tank computer screen. Margot and I loved the water effect but what was up with the fish tank? Tacky, tacky.
The back of the room features a semi-private large table, which looks fabulous for throwing parties. There are also two identical smokestacks that strangely reminded me of the ones at Ovelia. Coincidence? I think not! While the overall effect was cool, it just seemed like Balu was trying way too hard to be trendy.
Food:
The menu at Balu revealed the usual Med cafe suspects--sandwiches, salads, pita, dips, pizza, specialty drinks and coffee. Margot and I were starving so we both ordered personal pizzas. They sounded great on the menu but in the end we were disappointed all around.
Tomato, Basil, Mozzarella Pizza - This was Margot's choice and it came out quickly. While it looked good and was piping hot, the taste wasn't anything special. Actually it tasted processed, like a frozen pizza. That's not to say that the dough wasn't good--that was actually my favorite part--it was just far from spectacular. Because we were both super hungry and because they messed up my order, we ate this pizza quickly.

Blue Cheese, Spinach Pizza - I thought that this sounded interesting and because I don't often eat blue cheese, I was really looking forward to it. To my surprise, what I received was an exact replica of Margot's pizza (tomato, basil, mozzarella). There was no trace of spinach or blue cheese so I spoke up and sent it back. It reappeared in about 10 minutes with what looked like the same pizza with spinach hastily plopped down on it and still no blue cheese in sight. Needless to say, I was disappointed and especially at the waiter's response of "sorry, we left this pizza in the oven by mistake." What a lie! It was clearly the same pizza as before with just a couple of quick "fixes," which were worse mistakes. I didn't appreciate the trickery and would've much rather preferred honesty.

Service and Cost:
As mentioned above, I wasn't at all wild about the service. They were dishonest, disorganized and inconsistent--we got a different waiter just five minutes after the first one took our order. The staff seemed frazzled and unsure of themselves--could be because Balu is so new but this needs to improve. Pronto!

The prices are low. Our pizzas cost $8 each and we even got drinks ($7-$8 each). Not bad. Sandwiches will cost you in the neighborhood of $7-10 and the same goes for burgers. You won't be dishing out the big bucks here because it's simply not worth it.