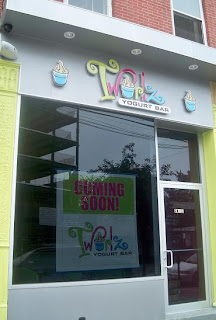 A cute little yogurt shop called Tworlz is coming to the Astoria Blvd neighborhood, between 28th and 29th street just a short walk from the subway.  I peeked in out of curiosity and the place looks great - decked with cheery colors and a few tables and chairs for you to sit inside.  It could be a great alternative to the ice cream shops in the nabe such as Baskin Robbins, the Side Door, Coldstone Creamery and the various bakeries that carry gelato.  Given that it's yogurt, it'll be great if you're in the mood for something lighter.

I'll keep you posted about when it'll open - but it looks like it's almost ready.