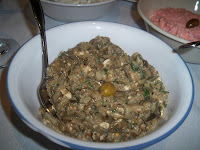 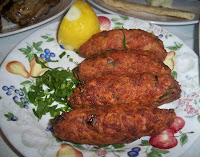 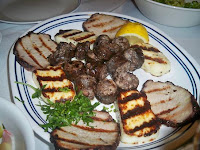 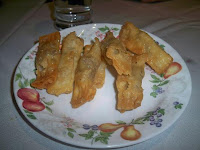 I mentioned last week at how in awe I was at Zenon Taverna's Restaurant Week Special--a 16 course meze tasting for two for $35. Not sure how much better you can get and on top of it all, the food is spectacular and the service is as hospitable as can be.

Dan and I had the pleasure of dining with my Joey in Astoria pal Meg and her boyfriend Tom. The four of us had a great time and consumed enough food to feed a small country.
Here are some of my favorite dishes of the night but truth be told, I liked almost everything:
Melitzanosalada (Eggplant Dip) - This was one of our cold meze, served at the beginning of the meal. It had a gentle taste and was flavored with parsley, feta cheese and a touch of lemon and garlic. Unlike other eggplant spreads I've tasted, this one wasn't too garlicky, and thus was lighter on the stomach. It was also nice and spreadable and I kept reaching for it even after our meat course arrived.
Keftedes (Cyprus Meatballs) - These meatballs were different than what I'm used to and in a good way--they're made with pork, shredded potatoes and even a hint of mint. The best thing about them is that they're fried and therefore have a slightly crispy exterior. My dining companions enjoyed them too and when embellished with a spritz of lemon, we couldn't get enough. I have to be honest in saying that my friends liked the Sheftalia or char-grilled meatballs better than these, but I'm sticking to my guns with the keftedes--they're something special.
Grilled Halloumi (Cypriot Cheese) - Served on a huge platter with meats such as loukaniko (Cypriot sausage) and luntza (smoked pork loin), this was the true show-stopper of the night. It was salty with a slightly stringy consistency and beautiful char marks. It was a delight to put on pita, especially when topped with homemade tzanziki.
Loukaniko (Cypriot sausage) - I mustn't forget the homemade Cypriot sausage that's marinated in red wine and various spices--including a secret spice, which comes straight from Cyprus. The spice is somewhat of a mystery even in the home country--it looks like a peppercorn and gives these bite sized sausages their unique taste. Zenon's Loukaniko is anything but dry--dip it into tzanziki or just eat it plain, it's spectacular.
Scordalia - This has got to be the best scordalia (cold mashed potatoes with garlic, olive oil and lemon juice) in the neighborhood--and I've tasted many. Never have I ever had this dish without a harsh garlic aftertaste--until now. Zenon concentrates on the lemon instead, leaving you with a clean, refreshing taste in your mouth. This was another one of those unforgettable side dishes, which I reached for during the meat course.
Lady Fingers - This was a special dessert prepared by the lady of the house, Mrs. Papageorgiou. It consisted of fried dough stuffed with a typical Baklava filling, accented by rose water. Rose water might sound unusual but it was terrific--a nice surprise at the end of each bite, it provided a luxurious ending to an indulgent dessert. It almost felt like smelling the most wonderful, fresh picked flowers at the end of each bite.
Have I enticed you yet? Restaurant Week ends next week so you still have some time to take advantage of this special.
Zenon Taverna - 34-10 31st Avenue, Astoria, NY 11106
718.956.0133
N/W Train to Broadway
www.zenontaverna.com
Posted by Fooditka