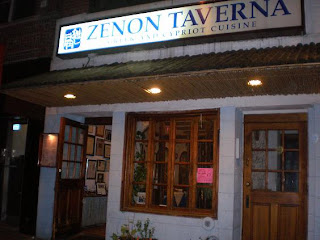 A bit of complaining never hurt anyone--especially in my last post when I whined about the lack of "deal" at the upcoming Queens Restaurant Week. As early as last night, the owners of Zenon Taverna--that fabulous Greek eatery on 31st Avenue--contacted me to clarify the mix up, which still hasn't been updated on the Discover Queens website. Then later today, someone else who's organizing Queens Restaurant Week put the entire thing in writing. The bottom line is, there is a deal but it won't be found in every restaurant. Here it is:

Some restaurants will be offering the standard $25 prix-fixe lunch per person and the $35 prix-fixe dinner per person.
AND...
Other restaurants will be featuring a 2 for $25 lunch prix-fixe and a 2 for $35 dinner prix-fixe.
Now you're speaking my language! Next steps will be to get all of this information on the Discover Queens website and to make clear, which restaurant falls into which category. I hope that the majority of them are the 2-fors!
I'll let you know as soon as I find out.
Posted by Fooditka