The Pretzel Croissant - Queens Vs. NYC 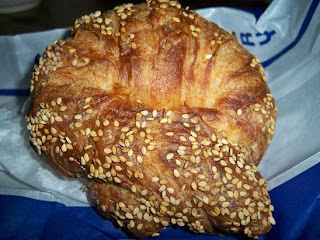 About a month ago, I wrote about a unique snack, the pretzel croissant, which I sampled from Cafe Henri at the Taste of LIC Event. The wonderful fusion of salty and sweet flavor in this treat was so unforgettable that I found myself going back to Cafe Henri and asking for more.


I was disappointed to find out that the pretzel croissant was not yet available there but that it would be coming soon. Since patience isn't my strong point, I decided to seek solace at NYC's The City Bakery, which is known for its fluffy marshmallows, melted chocolate chip cookies and now the pretzel croissant--which has a cult-like following. You can even check out their custom micro-site, dedicated to this baked goodie.

The pretzel croissant is readily available in The City Bakery front-counter display. You'll have no trouble noticing it because it's clearly labeled and the croissants are extra large. I bought one for a whopping $3.50, which is to be expected here--everything is priced at a premium. But despite the steep price, the final product was so worth it that I'll surely be coming back for more (until Cafe Henri starts supplying them, that is). Here's a bit more about The City Bakery pretzel croissant and how it stacks up to its Cafe Henri counterpart.

The City Bakery Pretzel Croissant - The sheer size of this thing was impressive--it was a legitimate croissant, whereas the one at Cafe Henri was a mini version. I loved the large croissant and split it with Dan but I would've been happy with a bite-size version as well. The shape of The City Bakery croissant also mustn't be ignored. While it looks like a croissant, it's joint and crossed at the ends just like a pretzel. It almost looks like a set of forearms in a relaxed pose--quite cool!

The crust on The City Bakery's version was very pretzel-like--super-salty and the sesame seeds were fresh and crunchy when you bit into them. I definitely favor sweet over salty and in terms of the crust, I preferred Cafe Henri's, which was lighter on the salt. The inside however was much better at The City Bakery. It was soft, buttery and as flaky as can be.

Overall, I'd call this pretzel battle a close tie. I'll definitely visit The City Bakery during the week, as it's close to my job but I'll also be hitting up Cafe Henri in LIC on the weekends. What can I say, you can never have enough sweet and salty goodness. Long live the Pretzel Croissant!