Calexico Cart - The Best Burrito I've Ever Had 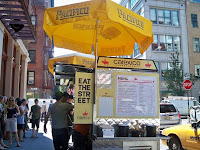 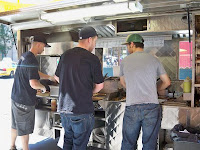 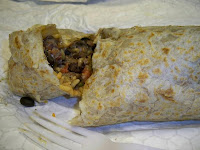 Calexico Cart - Corner of Wooster Street and Prince Street, NY, NY 10003
R/W Train to Prince Street or 6 Train to Spring Street
www.myspace.com/calexicocart
I've been admiring the Calexico cart for months now but haven't been in the mood for a big burrito lunch--until this week. A co-worker of mine had to cancel lunch last minute, putting me in a slight jam because I didn't pack my usual sandwich (I'm very frugal during lunchtime). But...I've been dying to check Calexico out so I walked over to their Soho locale and ordered a famous Carne Asada burrito. And was I glad that I did!
The Calexico Story:
The Calexico cart is no ordinary food truck. Run by three brothers from Southern California, their goal is to bring Cali/Mex style food to NYC streets. Their simple cart is stationed in trendy Soho, right near the Camper store (and also close to the Apple store) on the corner of Wooster and Prince Street. If you walk by, there's no way you'll miss them--they have a pretty loyal following and you'll always find crowds chillin' around the truck. Although the wait at Calexico averages about 25-30 minutes during lunchtime, you can linger around, talk to the Calexico guys and enjoy their eclectic music mix of hip hop and alternative that they play on their ipod--or you can walk around the stores in Soho and come back.
The Menu:
The Calexico brothers specialize in a bodacious Carne Asada--a marinated grilled beef that'll stop you in your tracks. I highly recommend trying this the first time around and then hitting them up for other goodies such as the pollo asado (marinated chicken) and the chipotle pork.
Calexico offers up their meats in two ways--in a burrito or a taco--that are served with pico de gallo and guacamole. Aside from the meat, they also have a black bean burrito and taco--a great veggie alternative that's nice in the summer. For an extra couple of bucks you can also add-on more cheese, guac and even a chipotle "crack" sauce. Another cool thing is that every burrito could be ordered in a bowl--in other words, naked burritos without the tortilla. Nice touch--very Chipotle-esque.
My Burrito:
I automatically gravitated to the Carne Asada burrito because that, after all is what the Calexico brothers are known for. To say that it was the best burrito I've ever had would not be a lie. First off, the tortilla was toasted so it was slightly crispy but not too crunchy, avoiding breakage. And the beef was the absolute best part, as it was tender, fresh and marinated in a variety of spices. It was anything but bland and had a definite kick to it--but it wasn't overpowering. The only thing I wished was that it had more guacamole--I couldn't really taste it, maybe because it melted into the pico de gallo.
Service and Cost:
The service was good and well organized--the Calexico brothers have the customer experience down pat. One of the brothers stands in front of the cart, takes orders and lets you know how long the wait will be. The other two are hard at work with the meat and the fixins. The greeter also helps prepare the food and once your name is called, he's also the man that you pay. It seems like a good system that works for them.
The Calexico cart won't set you back too much, especially given the wonderful quality of their food. Burritos will cost you between $6-$8, tacos $2.50-$4 each and the add-ons and sides range from $.50 -$4.00. The only thing I wish is that they sold beer but I guess that wouldn't work with the street setting.
Overall a fabulous cart that shouldn't be missed.
3 very enthusiastic Mmmms
Posted by Fooditka