A Summer Tasting at Mundo 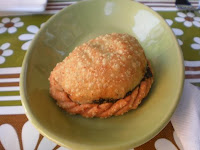 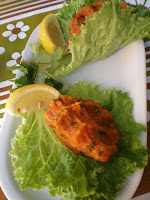 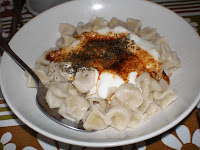 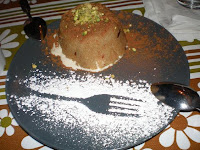 Mundo is a unique culinary find--not only because it features cuisine from all over the world but also because it's obscenely delicious. I was invited to their summer food tasting by Executive Chef John and was happy to attend along with my Joey in Astoria colleague Meg. While Meg had tried Mundo once before, our visit made her a full convert. I think she'll be coming back for more this summer and so will I.

Below is a rundown of the yummyness that we sampled:
Hungarian Cherry Soup: This was our first dish of the night and it was even better than the first time I had it. There were plenty of sour cherries in it and the chilled taste was fabulously refreshing, especially on a hot day. The last time I had it, its coloring was a little light (and not the most appetizing-looking) but this time it was perfect and very cherry-like. Meg seemed impressed and we both guzzled our soups down with gusto.
Dip Assortment: We were eager to have Mundo's famous carrot dip, which is so much more than just carrots. It has a creamy consistency and a lovely garlic flavor that kept us reaching for our pita slices. We also tried the fire-roasted eggplant dip and liked that too. It had a nice char flavor that was gentle to the palate. Our third dip was the hummus and roasted pepper dip, which was pretty standard and didn't wow us too much.
Red Sonjas: Mundo's signature dish couldn't be ignored and while Meg was looking forward to it, I was feeling lukewarm about it, based on my previous experience. But what arrived on our plates far surpassed my first mediocre tasting. These red lentil patties were absolutely delectable--soft and flavored perfectly with parsley, scallions and a hint of garlic. The best part was wrapping them in fresh lettuce leaves like bundles of precious cargo. I could've eaten at least three--and they were filling too.
Halloumi in a Vine Leaf: Being that both of us love cheese, we wanted to experiment with this Cypriot delicacy. Meg was intrigued by it and I, already tasting it last time, knew that it was good. The cheese was warm and stringy while the vine leaf provided nice earthiness--its shape also contained the cheese neatly, like a blanket.
Vegetable Empanada: This is one of the best empanadas I've ever tasted. Its excellence lies in the flaky, airy crust. While some empanadas have the tendency to be heavy, this one was anything but. The fresh, clean ingredients of spinach and feta were stellar and once again, I wish I had another serving in front of me.
Fava Bean Side Dish: I've never tried this here and actually didn't even see it on the menu until John explained that it was part another dish, the Egyptian Artichokes. It was certainly an in-between dish and a good palate cleanser. I liked that it was a veggie option, prepared sans frying and other unhealthful methods. Meg wasn't overly impressed by the quality of the beans but I thought they were OK. Definitely not a stand-out dish but it was pleasant enough. I liked the dill and lemon garnish for its crisp, acidy flavor.
Cheese Rolls: Now this, I would call a stand-out. It was presented beautifully in hand-rolled pastry dough and filled with feta cheese and roasted red peppers. The feta was melted beautifully and once dipped into black & red raspberry sauce, it was pure heaven.
Ottoman Dumplings: I was excited to have these for a second time and once again, they proved why this dish stays on Mundo's menu the entire year. The dumpling dough is exquisite and you can tell that it's handmade. As you're eating each once, you can imagine one of the Mundo chefs individually pinching the dough together to make a rustic triangle. The dumplings are stuffed with ground beef and topped with a fragrant garlic-yogurt sauce. It's fun to incorporate the sauce in all the dumplings and enjoy them in their full, creamy glory. This dish is more than a stand-out, it's a show-stopper.
Warm Semolina Helva: We couldn't believe that we had room for dessert. Well, we didn't but we ate it anyway because it was outstanding. The semolina exterior was warm and cinnamony while the interior was filled luxuriously with vanilla ice cream. A spoonful of this hot and cold combination put a satisfied smile on our faces. The crunchy pistachios were a great topping that enhanced the flavor of both the semolina and the rich ice cream. Meg and I were happy to split this, as I think it's a bit indulgent for one person.
The service was good and quite attentive--we were at a tasting after all. The servers chatted with a bit and we enjoyed the camaraderie. You really feel that Mundo's staff is a cohesive team, working towards a common goal--to please and feed Astoria (and beyond).