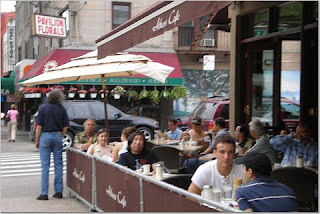 Athens is one of Astoria’s most well known Greek cafes. This large establishment has extensive outdoor seating and rests on its own isle on 30th Avenue, owning the whole block between 32nd and 33rd street.

Atmosphere:
This boisterous café is never empty and often occupied by regulars—Greek patrons who sit outside, sip coffee from tall bamboo glasses, smoke cigarettes and watch everyone pass by. You can even find them sitting out there in the cold months because this area is heated so nicely.
Athens offers up a great social scene--tables are especially packed on the weekends with Astoria’s twenty and thirty something crowd.

Food:
The coffee is great and the selection so extensive, but I wouldn’t come here for the food. Their sandwiches and salads are bland and I much more prefer going to neighboring joints for Greek food. I'd rather go to Pinocchio across the street which has tasty gyros, salads and pizza.
In terms of coffee, the iced cappuccino is fantastic--creamy, frothy and so filling! Basically all coffees come in huge portions and some of them are served in signature bamboo glasses--make sure to ask your waiter which ones! But what I love most about Athens is that I can come here, sit outside on a nice day, sip a big glass of cap and chat with a friend for hours.
Service and Cost:
The service here is quick and even before you can close that menu, there’s a young waiter with a cute accent at your side, asking for your order. Another nice thing about the service is that they don't rush you. A loooot of time can go by before you look down at your watch and realize you've been nursing the same coffee for over an hour--it's great!

Drinks are a bit on the expensive side, ranging from $5-$7 for specialty coffee but I think it's worth it. Think about it--you're not only paying for the drink, you're paying for the atmosphere and the luxury of lounging around. If you look at it that way, you won't mind paying a couple of extra bucks.
Posted by Fooditka