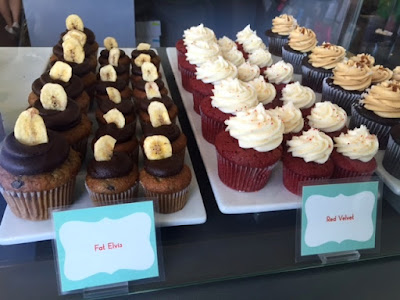 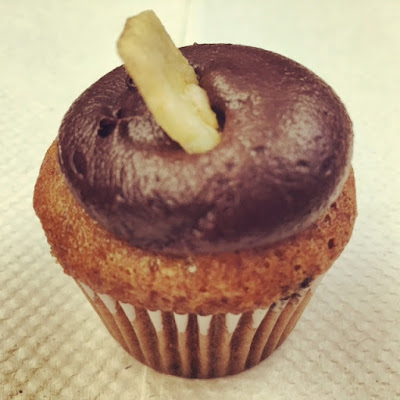 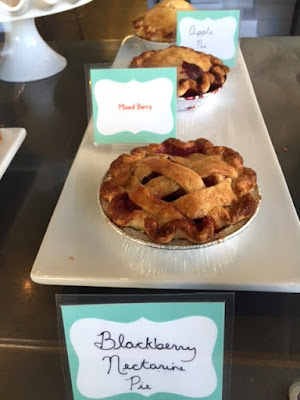 Although I've had my fair share of donut and ice cream exploration in Portland, I feel that I've left cupcakes by the wayside.  This is why I was excited to discover Saint Cupcake, a sophisticated cupcake shop in Downtown Portland, not far from where I work.  Its name caught my eye right away and made me look inside, only to discover some impressive displays of regular sized and mini gourmet cupcakes.

Atmosphere:
With three locations of this charming sweet shop, it's likely that at least one is convenient for you to pick up some treats.  The SW shop just happened to be the closest for me, and I was immediately drawn to its cheery facade and its colorful logo.  One look at this place and I knew I'd find something amazing inside.


It took me just two days to come back with my co-worker Molly and indulge in some cupcakes.  Happy to find they had mini cupcakes in every gourmet flavor, it makes your purchase a little more guilt free and it also means that you can try more things.  Although people usually get cupcakes to go, there's plenty of room to sit inside and enjoy your dessert in its beautiful space that boasts high ceilings, plenty of light and a glimpse inside the kitchen where the sweet magic happens.

Cupcakes:
The fact that Saint Cupcake produces so many varieties of cupcakes makes ones decision a tough one, but a few of my favorite flavors such as peanut butter, bananas and chocolate made things easier for me.  I must note that besides cupcakes, they also have beautifully crafted lattice pies, scones, cinnamon buns, brownies and other things.  I'll have to save those for next time though.

Fat Elvis - This cupcake had the three magic ingredients I just mentioned above, and it was fantastic.  The banana cake was perfectly moist and studded with dark chocolate chips that provided a little bit of crunch.  A deliciously decadent peanut butter and chocolate fudge frosting topped this baby, with a crunchy banana chip poking out the middle.  It went down fast since I got the mini version, but after finishing it, I realized it was just enough.


Toasted Coconut Cream - I got this cupcake for my friend Annie but it was too large for her, so she shared it with me.  Once again, the cake itself was the best part, with a tasty moist interior that was embellished with crunchy toffee bits.  The cream cheese frosting on top was a little too heavy for me, and I could've done with a little less of it, however the toasted coconut was crunchy and delicious.

Service and Cost:
Since the shop wasn't crowded, Molly and I received great service with a smile.  Our cupcakes were handled with care and packed up perfectly for our walk back to the office.  They all survived the short walk even in the sweltering heat - which is more than I can say for Molly's poor cupcake quartet on her ride back home.

Costs are moderate for a gourmet cupcake shop but definitely not unreasonable at minis being just $1.50 and the regular sized cupcakes coming in at $3.50.