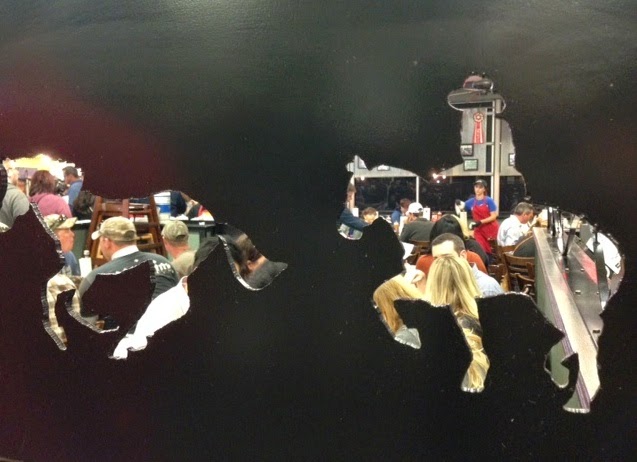 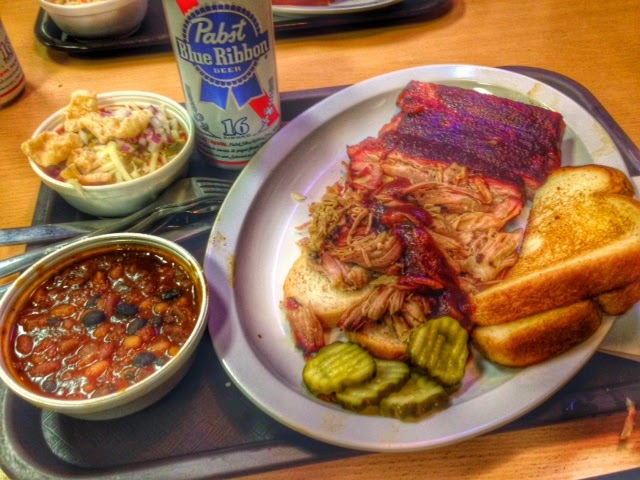 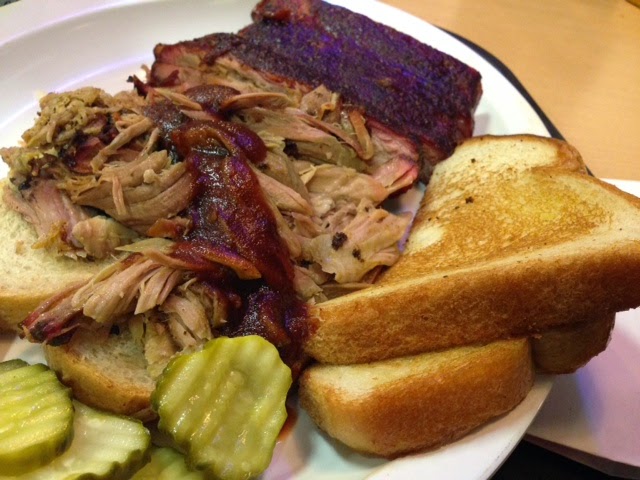 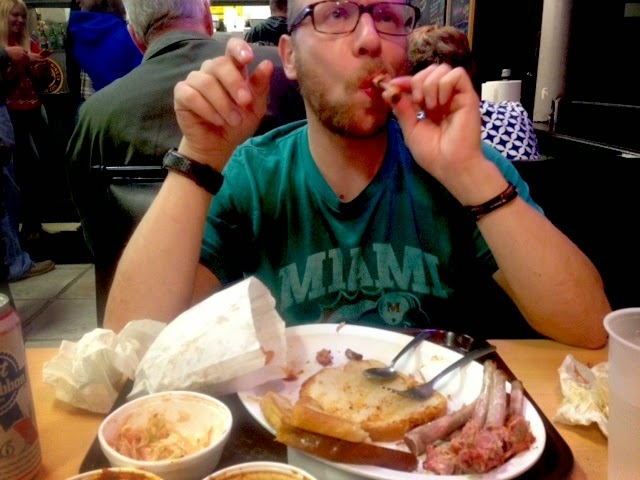 While on our cross country journey to Portland, we stopped off in Kansas City between Chicago and Denver.  Although we didn't spend much time there, the short while we did have was memorable and delicious - especially because we stopped off to have the legendary Oklahoma Joe's BBQ.

Atmosphere:
Located just outside of Downtown Kansas City in the Roeland Park neighborhood, Oklahoma Joe's is a big destination for locals and visitors.  Authentically located in a Shamrock gas station, those of you who've been to Texas know this is a good sign.  The interesting part is that the gas station is fully functioning, which further adds to the restaurant's authenticity.

Having said that, the back part of the gas station (usually where the food mart would be) has been converted into a BBQ haven and I kid you not when I say there's always a line out the door.  While the line is long, it progresses quickly and is a fun experience, as it adds to the suspense and promise of delicious ribs at the end.  Needless to say, the wait is totally worth it, and then some.

Food:
While on line, we had plenty of time to decide what we wanted to order.  Ribs were a given, as that's what they're famous for, but I also wanted a few other things such as pulled pork and other fixins.  Dan and I ended up sharing mostly everything, except the ribs.

BBQ Ribs - After one bite of these ribs, it's easy to understand why Oklahoma Joe's deserves the myriad of awards that hang on their walls.  The ribs are rubbed with their signature BBQ sauce and while they're on the wetter side, the meat pulls apart perfectly, revealing an impressive smoke ring in the middle.  Each bite exemplified a beautiful marriage of smoke, flavor and expert seasoning.  I think both purists and novices would approve.

Pulled Pork - Just like the ribs, the pulled pork was also stupendous.  Rich, juicy and flavorful, I enjoyed eating it with the buttered Texas toast as an open faced sandwich.  Again, you don't need much else with it, as the flavors really stand out, but I put on some extra BBQ sauce for good measure.

The Sides - Impressed with the classic side dishes offered, we shared an order of the baked BBQ beans, the spicy slaw, as well as their seasonal pork chili.  They were all tasty of course, but the baked beans were my favorite, as they were a little sweet and smoky with a hint of spice.  They were best enjoyed with the ribs.

Service and Cost:
Once we got to the front of the line, we were helped in a quick and efficient manner.  Everyone here is a total pro and we received our food in a mere 2 minutes after ordering.  Everything was delicious, fresh and piping hot.

Prices are fair and in my opinion inexpensive for the superior BBQ quality you're getting.  Two rib dinners, a side of chili, fries and two drinks set us back about $37 with tax and tip.