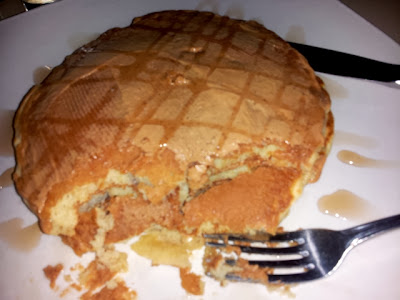 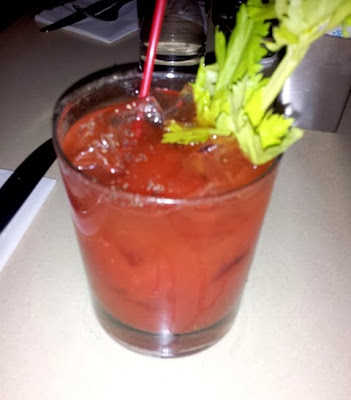 It's literally been years since I've visited Sanfords, and not because I didn't want to, but because it's always so hard to get in.  Well luckily, my friend Jennifer and I seized the opportunity at the right moment, as we went in on a Saturday after 2 p.m. when the brunch crowds were dying down.  We had a hankering for pancakes and made out quite well.

Atmosphere:
Even though I've been here before, Sanfords has gone through a major transformation, so it's worth describing the atmosphere a bit.  While the actual size of the space hasn't changed, the layout has become a lot more modern and open with contemporary furnishings such as leather booths, oversized lamps with muted lighting and a sleek bar.

Despite it being past prime brunch dining hours, the place was still full and buzzing, and we waited about 10 minutes to be seated.  The overall vibe felt very fast paced and almost clubby, as the dim lighting and candlelight gave off the perception that it was much later in the day.  In terms of the clientele, it was mostly a younger 20 and 30 something hip crowd of brunch lovers.

Food:
Jennifer and I were both pretty set on having pancakes and were delighted that we could choose between four different ones.

Pancakes - The minute I spotted peanut butter and banana pancakes on the menu, I couldn't look at anything else.  As you can see here, the portion was generous, but I told myself that I wouldn't totally pig out by eating the whole thing.  That wasn't an easy task, as the pancakes were soft and fluffy and glazed with a thin layer of peanut butter and a little bit of honey as well.  Nestled right into the pancake batter, the bananas were a fun little surprise you got with each bite, and they made the pancakes that much more moist.

I had a bite of Jennifer's Banana Chocolate Chip pancakes as well, and those too delivered.  The texture was as lovely as on my pancakes, and the flavor was more classic since they weren't embellished with anything on top.  I almost liked them better than mine, as they represented something very familiar and comforting.  While it was nice to pour a little maple syrup on top of them, you didn't even need it.

Bloody Mary - Now usually my go-to brunch cocktail, I was curious about how this one would stack up.  I'd say it was standard but nothing too exciting, as the tomato juice was pretty ordinary and the seasoning didn't have much kick.  I'd also recommend a bigger (and crunchier) piece of celery for the garnish.

Service and Cost:
Because they were quite busy, I think the service was just so so.  There wasn't anything particularly wrong with it, but it wasn't overly personal or impressive.  Let's just say that the service isn't what's making me want to come back here.

Costs are moderate but slightly on the higher side for brunch.  We paid about $20 each with tax and tip for pancakes and one drink.