Start Your Morning with a Cypriot Breakfast 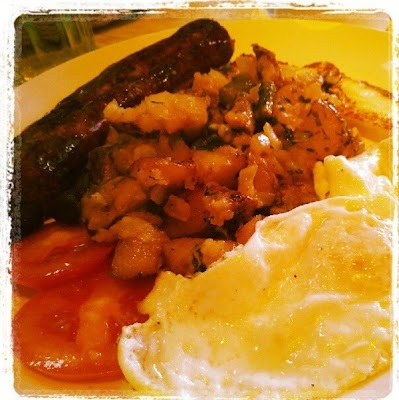 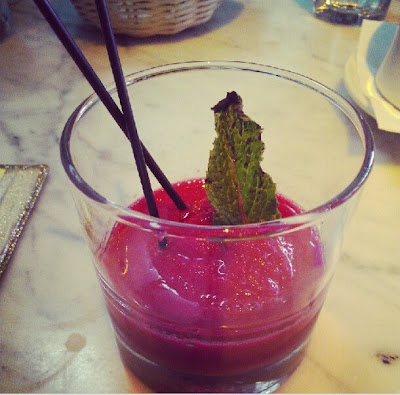 Last week, Meg, Mackenzi and I spent some time at a local oldie but goodie over breakfast while we discussed some exciting We Heart Astoria matters.  That oldie/goodie is no other than Cafe Bar, which has been on a 24/7 schedule since the summertime.
Serving breakfast each day, not only on the weekends, from 10:00 a.m. til 5:00 p.m., we were happy to see so many solid choices, each with a unique Greek and Cypriot twist.

We each ordered some form of eggs, and what immediately caught my attention was the first thing on the menu, called a Cypriot Breakfast.

Cypriot Breakfast - Making up a true mini Mediterranean feast, this breakfast offering is quite hardy, boasting a full plate of homemade Cypriot sausage, fried eggs (over easy), grilled halloumi cheese, fresh tomatoes and Cafe Bar's signature, hash browns.  All in all, a winning combination, I think the sausage definitely stole the show, and I couldn't believe how large it was.  Giving away a nice chunk to Meg for a try, she seemed to really enjoy it, and we both thought the homey flavors and the fresh herbs that were stuffed into the pork casing were just gorgeous.  Only later, I found out that this sausage is prepared in red wine, which made a lot of sense, considering the delicious pungency of each bite.

The perfectly cooked eggs had a lovely, silky yolk, which coated the already flavorful hash browns nicely, creating a rich golden glaze.  I loved seeing chunks of mushrooms and asparagus amongst the potatoes and appreciated the creativity in the preparation, as did my friends.

Red Dragon Smoothie - During our visit, we were also offered a first sip of a new smoothie on the menu called the Red Dragon.  Boasting a beautiful magenta color that just screamed beets, it's what was indeed inside, along with hints of apple, pear, mango, pineapple and cinnamon.  Each sip had a slightly earthy aftertaste that was also a little sweet, which reaffirmed its nutritious contents.  It was a great way to start the day and get energized, so if you see it (or don't yet see it) on the menu, do just ask for it - they'll hook you up.

Service and Cost:
Although our meal was absolutely lovely, the service was a bit spotty, which was interesting to observe, given the sparsely populated space.  It wasn't anything that put us off necessarily, it was just something we noticed and it could've been a result of where we were sitting.

Costs are moderate and the above mentioned breakfast (with coffee) set us back about $18 with tax and tip.