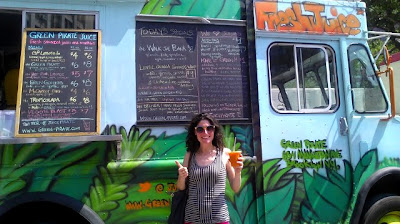 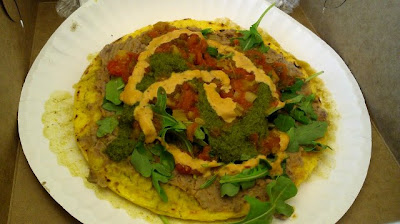 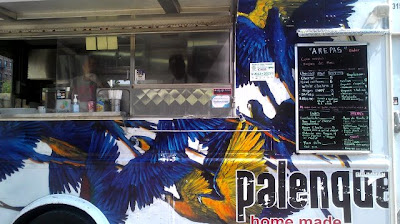 This past week, I had the great fun to once again indulge in some of our best gourmet food trucks that are parked outside of my building at work.  Trying two new vendors, including the Palenque Colombian food truck and the Green Pirate food truck, I was duly impressed and so was my friend Lara who came along to keep me company.


Palenque:
Immediately drawn to its gorgeous looking truck, decked with blue and red tropical parrots, I walked over and peeked at the menu.  It sounded lovely, boasting different types of arepas, which I'm a big fan of.  I loved that you can add different toppings to it including meat and veggies, but what I found particularly neat is that not all the arepas were made with corn, but some also with quinoa, brown rice and flax seed.  Because we wandered over on the late side (after 2 p.m.) there was no line, but Lara informed me that during peak hours, it's always busy.

Original Arepa with Frijoles Macerados - Deciding to keep things on the light side, I chose to go with an all veggie option with mushed red beans as the topping.  I thought this was the only topping at first, but shortly found out that this arepa comes with the works such as arugula, cheese, chipotle mayo, cilantro, butter and guacamole.  I omitted the butter and cheese but kept on everything else.

First off, it looked beautifully colorful and came in a white box with a sticker that showcased the same bird design of the outside of the food truck.  I thought that was pretty neat and appreciated the attention to detail.

The arepa itself was really tasty, the dough slightly sweet but also savory was the perfect vehicle for the beans and the veggies I just mentioned.  Although it was a bit unwieldy (you had to use a fork and knife to eat it), each bite offered nice earthiness from the veggies but also a comforting bite from the arepa and the soft beans.  The mayo was great too, as it provided that pop of flavor to an otherwise mild mix of ingredients.  Overall, it was really filling and just one can definitely tide you over for the afternoon.

Green Pirate Juice Truck:
Seeing this truck on the streets of Soho, I've been meaning to try it and get a refreshing juice or smoothie.  Since it was super hot and humid on the day we went, I was in the mood for a smoothie and got the tropicolada with banana, pineapple, coconut milk and OJ.  It was a little creamy but still light and refreshing, tasting like a virgin pina colada.  I wish I got a little more banana in there, but overall it was pretty tasty, but definitely not worth $6 for a 12 oz drink.

Lara got an interesting juice called The McCarrot Park with carrot, apples and ginger too.  The latter ingredient was really pronounced and added something special to this already vibrant concoction.  I'd definitely get this over the smoothie next time, as it had more depth and was a step up from the somewhat ordinary tropicolada.

Service and Cost:
The service at both trucks varied greatly, as we had a wonderful experience at Palenque and quite an awful one at the Green Pirate Juice truck.  The staff at the former was full of smiles and an overall bright and cheery attitude, while the employees at the latter were surly and unpleasant.  Maybe it was just a fluke, but it left Lara and me with a bad impression.

Costs were fair at Palenque at just $7 for the hearty arepa I described, and quite steep at the Green Pirate, at $6 for a small drink that wasn't a stand-out.