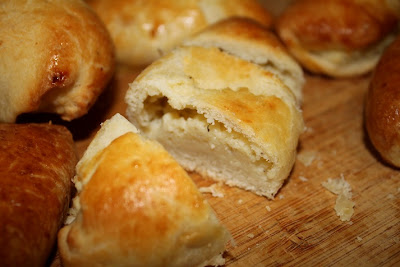 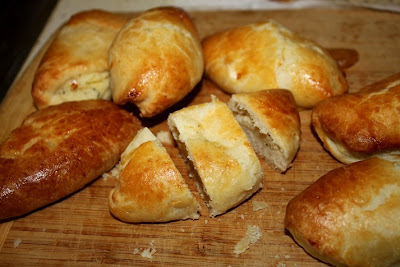 It's been a little while since I've been to my favorite Greek Astorian Bakery, Artopolis, so I decided to pop in today, mainly to pick up some goodies for Queens Swap.  On my mind since I last read the Edible Queens article about their halloumi pita, I've been really craving their breads and of course wanted to try the aforementioned specialty.

As I walked up to the bread counter, I noticed a nice round olive pita and envisioned the halloumi being somewhere nearby.  But when I asked about it, to my chagrin I found out that it wasn't yet ready, so instead I picked up these cute mini cheese pies you see above.  Wow oh wow, so much for settling!  Not only were these little cheesy bites a big hit at the swap, I've been thinking about them ever since.  Let me elaborate a bit.

Mini Cheese Pies - Looking like little golden torpedoes, the cheese pies were perfectly crusty on the outside and really soft and creamy on the inside.  The cheese filling was a mix of ricotta and a Greek cheese (maybe anthotiro), which was slightly sweet but also enhanced with some fresh herbs like thyme.  Overall, it was a really lovely treat, and something perfect and bite sized when cut up into thirds.  Great for entertaining, I'd recommend serving this on its own or alongside spanakopita too if you so wish.  Artopolis has the mini version of the latter too, which boasts the same flaky crust.

Cost:
It was nice to see that these little pies were only $1/piece, which was quite surprising, as the other baked goods in this place tend to be pretty expensive.  I found out that the halloumi pita I was longing for was a whopping $4.50 for a not so large piece. Go figure!