Hey Cupcake! I Found You! 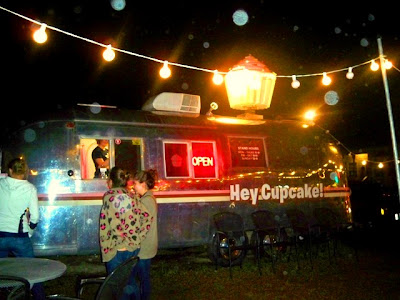 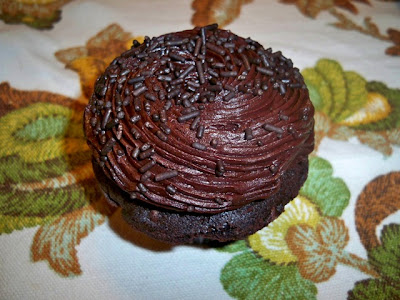 So I'm excited to report in to you from Austin, Texas right now, as I'm there for the South By Southwest Festival, which has so far proven to be mighty fun.  Besides the fact that I'm super excited to be at the festival, I'm also in total awe of all the food awesomeness going on in this city.  It doesn't come to me as a surprise, as I've been here twice before, but each time it reaffirms the high-quality foodie action that exists here.  I'll be doing a set of posts from  here, so hope you enjoy them, and if you're at the festival too, feel free to hit me up.

Although just at the start of my culinary adventures here, they've been pretty successful so far, as I was thrilled to discover an entire food truck lot of different treasures on South Congress Street.  One of those trucks caught my eye right away, simply because it was an old school aluminum looking blimp with a huge cupcake on top.  It was just plain cool, and as you can see from this pic above, it's called Hey Cupcake!  A pretty famous cupcake micro truck chain in Austin, Hey Cupcake! is well known in hard-core food circles, even outside of Austin.  I find their story inspirational, as it's a true entrepreneurial venture, summed up well in this video:

Double Dose Cupcake - After not much hesitation, I chose this double chocolate cupcake, with a rich chocolate cake base and a chocolate buttercream frosting.  Simple stuff, you may be thinking, and it looked that way too, but once I took a bite it totally transformed me.  This was something special, and a perfect example of why you shouldn't judge a book by its cover.

The cake was moist as can be and made of good quality dark chocolate, which was evident.  Even though it was sweet, it wasn't overly so, which was a good thing, as the frosting made up for that.  Despite it being rich and ultra luxurious, the frosting (with chocolate sprinkles on top) was light and airy.  It didn't leave me with that heavy feeling in my tummy that I sometimes get after eating extremely rich foods.  All around great stuff, and makes me super curious to try their other flavors such as the 24 Carrot, Sweetberry, John Lemon, and more.  Well...I just might have to.

Service and Cost:
I loved the friendly, casual nature of the staff here, as the person behind the counter was welcoming and conversational.  It may be that signature Southern Hospitality but I couldn't help feeling like I was talking to a good friend.  Certainly a nice way to be treated and another reason why I'd like to go back.

Costs are simple, $3 for a delicious bomb of a cupcake. BAM! That's good stuff.