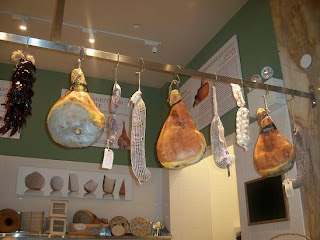 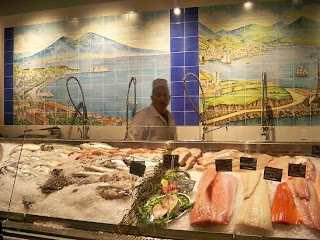 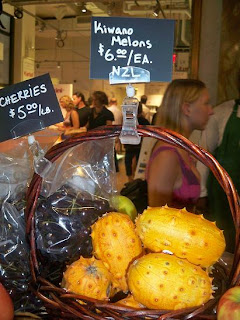 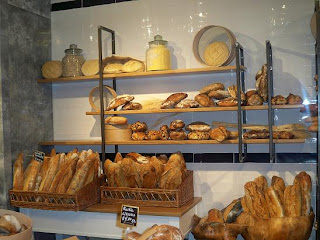 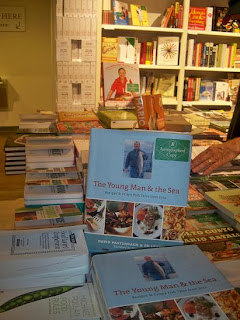 Eataly - 200 5th Avenue, New York NY 10010
646.398.5100
N/R Train to 23rd Street
www.newyork.eataly.it
Yesterday was my second visit to Eataly, the 50,000 square foot Italian-style marketplace in the Flatiron District that everyone's been talking about.  I was so curious about it, wanting to explore it as soon as it opened, that I no doubt added to its continuous congestion problem.  But such is expected when something this revolutionary and big comes to a food-obsessed city such as New York.
In my first visit last week, I was truly on sensory overload.  Not knowing where to look first, I was in awe of the immense variety of food products and shops that Eataly proudly offered.  From a mozzarella counter to a vegetable butcher; a fresh fish counter to a Neapolitan pizza and pasta shop; a cafe serving gourmet espresso to an artisanal bread bakery, this place really had it all.  See my full slideshow here, to really get the picture.

Atmosphere:
Resembling an open air marketplace (except this one's indoors), Eataly is a mixture of casual food counters that are focused on specialty food products, that I touched upon above (i.e. fish, meat, pasta, cheese, salumi, veggies, desserts, etc.) as well as a restaurant, a wine shop, a bookstore and even an in-the-works cooking school and travel agency.

The expansive space is divided into long corridors, with a large atrium (a piazza if you will) where most of the seating is housed.  As you can imagine, seats are very hard to come by and since the first time I've been, I noticed they added seating stations where people have to check-in with a hostess to get seated.  It keeps things more organized but doesn't make the lines any shorter.
In terms of checking out of Eataly, you won't pay for your products at the actual food counters.  Instead you'll wait on a surprisingly short and efficient line which leads to the cash registers, where you can conveniently pay with paper or plastic.

Food:
While the choice of things to get was immense, when it came time to actually make a decision, it was harder than I thought, as the lines at every counter were at least 15 people long.  I finally settled on the bakery and got a loaf of bread, which I'll describe in detail now.
Poppy Sourdough Baguette - I chose this bread because it was one of the least expensive options and it appeared to offer the most bank for your buck.  Well...appearances can be deceiving, as this bread provided neither value nor taste.  Its texture was hard, making it a challenge to chew.  I dressed it up with some butter, cheese and fresh veggies and even then it was dry and tasteless - I just didn't enjoy it.  Baguettes are supposed to be crusty on the outside and soft and chewy on the inside - this one was just painfully hard from the outside in. Bah!
Of course, I thought this was just a fluke but honestly I'm not so sure.  When I spoke to my friend Lisa about her experience, she mentioned that her pistachio gelato was inedible to the point where she had to throw it out.  Not a good sign, Eataly.

My friend Bo experimented with their fresh pasta this weekend (see a short video on how they make it), so I'll report back about that, but so far, I'm not impressed.  Will have to see how I do at the other food counters a bit later in the game.  Maybe as the place gets less crowded, quality will improve. Here's hoping...

Costs:
Molto expensive is the name of the game.  The bread I describe above was $3.80, about a dollar more than at Whole Foods per se, where it's a lot more delicious.  Other approximate price-points include: