CIA's American Bounty - The Culinary Mecca Delivers...and Then Some 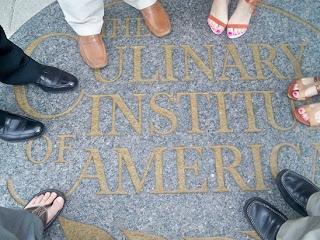 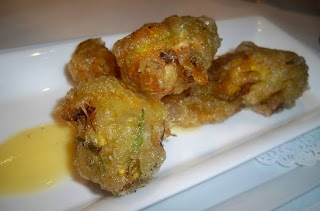 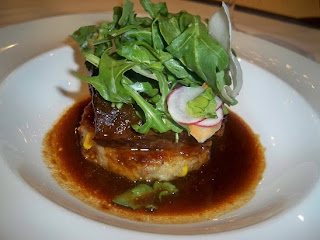 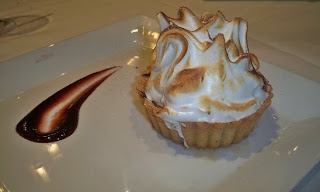 Dan and I took a road trip yesterday, along with a group of friends, including Adam and Ilona who organized an outing to the CIA (Culinary Institute of America) in Hyde Park.

Often referred to as the "best culinary school in the world," the CIA has produced acclaimed culinary talent such as Anthony Bourdain, David Burke, Mike Colameco (my personal favorite), Duff Goldman (aka The Ace of Cakes), Sara Moulton, Cat Cora, and so many more. And last but certainly not least, my friend Lisa's little brother Joseph, who is currently training there now, getting ready to be the next big thing in the food world!

Having the foresight to make a reservation 3 months in advance (sounds crazy but so necessary), Adam reserved a spot at American Bounty restaurant at which we had dinner.
Atmosphere:
Located in a large collegiate-style brick building, which houses all the CIA restaurants, we couldn't be more impressed with the scenery. Overlooking the Hudson River, the grounds were breathtaking with expertly manicured lawns and fresh flowers that not only looked beautiful but smelled divine. The lavender was especially wonderful and I picked a small strand, rubbing its fragrant buds between my fingers and relishing in the gorgeous scent.

Once we ascended the steps and walked into the building, we were once again welcomed by a sophisticated school setting with long corridors, displaying information about the CIA faculty on its walls and even a glimpse into the kitchens. I think they were just for show, but it was still really cool to peek in.

Another long corridor to the right of the entrance housed the American Bounty restaurant as well as the Apple Pie Bakery Cafe, which was unfortunately closed. I loved the traditionally classic decor of American Bounty with tall cushy, leather chairs, iron chandeliers, high ceilings and a very poised waitstaff, made up of the student body.

Seated at a large round table, we felt at ease and conversed freely, loving the spacious, grandiose vibe of it all. Throughout the entire dinner, we felt very happy and privileged to be there, feeling proud of ourselves that we made the much-coveted pilgrimage to this culinary mecca.

Food:
The menu comprised of seasonal specialties, which was highly appreciated and set a high expectation for taste. It's neat that everything is prepared by the students, but is also highly supervised by the Chef Instructors to ensure premium restaurant quality.

Appetizers - Everyone ordered an appetizer and we passed them around the table for all to get a bite. My stand-outs included the poached farm egg and white cheddar polenta, which was also dressed with crispy panchetta and chanterelle mushrooms. I've had this type of dish now twice in the last couple of months, once at reBar and then also at Vesta and it remains a favorite. I liked that the version at the CIA also included fresh tomato sauce, which added nice acid to a rather creamy dish. One suggestion I have would be to add a hint of truffle oil, which I think would enhance the flavors in this dish.

I also enjoyed the tempura summer squash blossoms, which are so good if done right. Stuffed with a creamy ricotta cheese and fresh herbs, it was a treat for the eyes and for the tastebuds. My only complaint was that the stem (the part that wasn't stuffed) was a tad oily.

Other yummy things we tried included the buttery, velvety foie gras, which was just a tad too big in portion; the goat cheese and beet salad that was fresh and earthy; as well as two summer soups - the sweet corn chowder, which was creamy and had the most intense sweet corn flavor and the chilled avocado bisque, which was like a guacamole elevated to the next level.

Entrees - Generally, I was even happier with the entrees than the appetizers, especially being impressed by the masterful way in which the proteins were cooked. For my dish, I ordered the slowly simmered BBQ beef short ribs, and I couldn't be more satisfied with them. The meat was so tender that you didn't need a knife to cut it, as it fell apart the minute you put your fork to it. Resting on a bed of creamy (and slightly sweet) corn grits, it provided a perfect way to mop up all the smoky BBQ sauce from the beef. Dan took a couple of bites and agreed that it was a winning combination.

I also had the pleasure of tasting Dan's grilled Berkshire pork chop, which was done beautifully. Sporting perfectly cris-crossed char marks, it had a slightly crispy outside and a really tender and juicy inside. The hefty mound of garlic mashed potatoes that came as the side were creamy, silky and just the perfect pairing with the pork.

Other dishes that were ordered but that I didn't try included the Roasted King Salmon, which apparently was overcooked and a rack of lamb, that Adam said was prepared quite nicely.

Desserts - Looking forward to the last (and the sweetest) part of the meal, we shared three desserts including a standard warm chocolate cake with pistachio ice cream; ice-cream filled profiteroles; and a lemon-lime meringue tart. Out of those, the meringue tart was my favorite, mainly because of its flaky, buttery crust. The actual meringue topping was also excellent - super fluffy, it showcased beautiful peaks with slightly burnt edges.

The chocolate cake was pretty standard while the pistachio ice-cream was exceptional - with crushed pistachios on top to add to its already nutty flavor. My least favorite were the profiteroles because they were a a tad dry and not very memorable - it's so hard to get these right and I've only had exceptional profiteroles maybe a handful of times.

Service and Cost:
We were served by the gracious CIA students, who were very nice albeit still green to the art of serving. The pacing of dishes was awkward and we found ourselves waiting around for an extra slice bread, a cup of coffee or whatever else. We weren't overly frustrated because we understood that it's all a part of the learning process - and we weren't obligated to tip extra on top of the 14% service fee that was added to the bill.

Costs are on the high side, but the quality of the food makes it worthwhile: