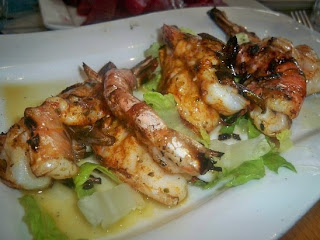 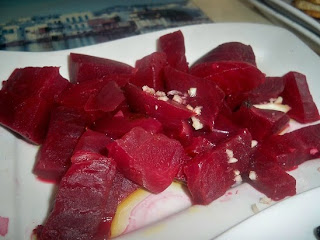 Given that it was such a scorcher yesterday, I was in no mood to cook so Dan and I decided to have a late lunch at Taverna Kyclades.  We've only been there once before and were absolutely blown away, and this time was no different.  Although it's usually unbelievably crowded and they never take reservations, we came at a good time, around 4:30 p.m.  Not only were there plenty of tables outside but we ended up getting a prime spot inside in the air-conditioned dining room.

We couldn't resist some of our favorite standbys such as skordalia, grilled calamari and fried Greek potatoes, but there are a few new things we tried too that I'll highlight here:

Grilled Shrimp - I remember the beautiful stuffed shrimp that Dan and Margot got last time and it got me in the mood for something similar but not as indulgent.  Plus because it was so hot outside, I went with the grilled version without the stuffing.  WOW! It was truly amazing.  The shrimp was jumbo sized and butterflied in the middle, which made it appear larger.  I loved the clean seasoning of olive oil, lemon and salt and pepper.  The dish couldn't be simpler, but it was quality.  The only semi annoying part was that you had to peel off its shell, which was first a nuisance but then started getting fun, as it got you more involved with what you were eating.

Garlic Beets - Beets are hands down one of my favorite vegetables, so when I heard that this was a possible side with my entree, there was absolutely no question that I'd choose it.  Again, the dish was simple - sliced, cooked beets dressed with olive oil and diced garlic.  I loved the natural sweetness of the beets and the garlic just gave it that something special - that Greekness you might say.  It was awesome and I'm definitely going to make it at home.

Service and Cost:
Kyclades doesn't mess around when it comes to service.  Because of the large crowds they get throughout the year, they're very efficient in getting you what you need.  All waitstaff and busstaff is experienced and yesterday was no exception.  Even though they're quick with orders, they don't make you feel rushed to leave, which we appreciated.

Costs are moderate but I think inexpensive for the great quality and the generous portions you get.  We paid a total of $57 including tax and tip for an appetizer, two entrees and two beers.