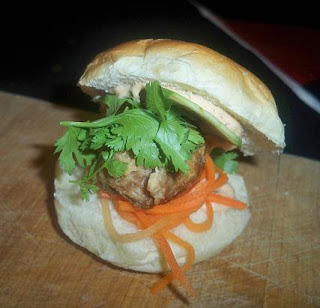 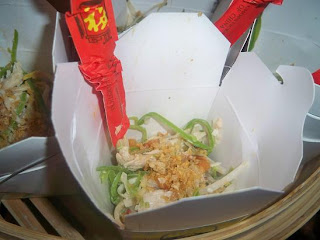 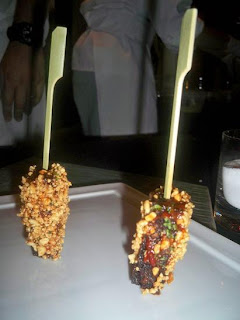 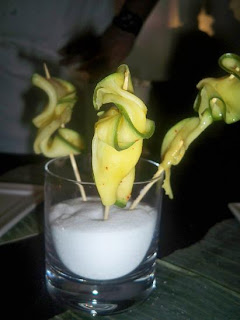 Last week was quite eventful for us foodies, as we enjoyed a trifecta of events, including the Eggland's Best cooking event I wrote about on Sunday, the 4th Annual NY Food Film Festival as well as the one, the only Fancy Food Show.

I was fortunate to go to the Food Film Festival for 3 consecutive days (and nights) and I can confidently say that I enjoyed it even more than last year.  My commentary below consists of the first event I went to this year, Brad Farmerie's South East Asian Street Food Market.  The following two events, one of which was held at LIC's Water Taxi Beach and the other at the Tobacco Warehouse in Brooklyn will be shared tomorrow.

Atmosphere:
This name just said it all, as the event definitely lived up to its description, providing us with a unique (and quirky) atmosphere, closely resembling what I imagined to be an Asian street fair.  Paper lanterns of all colors (but mostly red) hung loosely from the walls as well as beautiful red, black and gold Asian ornaments and colorful orchids, which embellished the serving tables. It definitely set the mood for a fun and unusual evening during which the food and the films where the true stars.

The official host of the evening was Chef Brad Farmerie of Double Crown and Public.  I've admired Brad and his skill with Asian cuisine ever since I had the pleasure of meeting him at the French Culinary Institute during which we judged the student final.  My friend Matt, the sous-chef from Double Crown was there too.  We got to chat a bit and I even ran into his lovely wife Barbara who I know from another life.

Food:
When I say that the food was funky, what I mean is that we munched on black-ink squid chips, beef tendon balls, pig's blood popsicles, dessert burritos and more.  Not only was the food innovative and different from anything I've ever tried, it provided true adventure with each bite.  Here are my highlights:

Squid Chips - I really didn't know what to expect from these and their dark color surprised me.  Chef and creator, Jonathan Meyer mentioned that the black color comes from the squid ink that's placed into the batter.  They tasted like well done pork rinds - smokey, super duper crunchy and just delicious when dipped into coconut curry soup.

Pig's Blood Popsicles - Another daredevil food, I went right for it and was yet again enlightened.  It had a soft, creamy texture, almost like a rich pork mousse and was coated in crunchy peanuts around the edges.  I loved the contrast in texture, as it brought on a memorable taste with each bite.  And the fact that it had a strong kick from chili flavoring didn't hurt either.

Ginger Balls - These were simply awesome and my all time favorite food of the night.  Prepared by Chef Ratha Chau of Kampuchea restaurant, they looked like little meatball sliders on a bed of crunchy carrot slaw.  Popping this delectable sandwich in my mouth was a delight, as the hearty pork melded together with the spicy mayo, citrusy cilantro and the pickled carrot slaw.  Yum...this is what all Asian street food should taste like!

Dessert Burrito - A popular street food "anywhere it's hot" such as in the Philippines and Malaysia, this burrito packed a sweet, refreshing bite with a scoop of cantaloupe and grape gelato.  Packed in a soft, delicate crepe, which resembled a burrito shell, it was also combined with crunchy peanut brittle and some fresh cilantro to give it zing. Here's a video I took at the event to give you a glimpse of how it's put together.

The Films:
After we enjoyed all that wonderful food, we got to watch the inspiration behind it in these short, independent food films.  Commentated by the jolly duo, George Motz of the film Hamburger America and Harry Hawk, owner of the Water Taxi Beach, each film got a proper introduction, followed by some words from the director.  After watching each film, the audience got to vote via text message for their favorite (multiple entries were allowed).

For the most part, we got to sample the food from each film, which gave more meaning to what we were watching.

Here's a list of the films.  I've starred my favorites.

If you had the pleasure of attending this awesome event, please weigh in with your thoughts and opinions.
Posted by Fooditka