Merchants - Not Just a Fun Cigar Bar, The Food Rocks Too 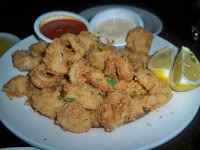 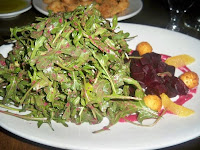 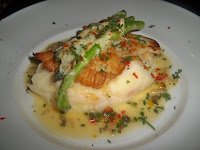 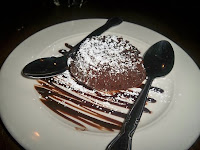 Merchants NY - 1125 1st Avenue, New York NY 10065
212.832.1551
4/5/6/N/R/W Train to 59 & Lex
www.merchantsny.com
Dan and I were generously invited to a fun dinner tasting at Merchants East last week.  Known for its cigar lounge downstairs, I've been there before with Dan and friends to enjoy a nice smoke.  But I've never tried the restaurant, which after this visit I will gladly return to.  The food was tasty, the menu eclectic and the price point accommodated every budget - all in all a home run.

Atmosphere:
There's no doubt about it, Merchants has a masculine feel.  The lighting is dim, the furniture is loungy and there's a cigar bar on the lower level.  Dan has attended a couple of guy dinners here--for birthday parties, bachelor parties and the like--all proving to be enjoyable.
But despite it being conducive to guys, the loungy, sexy vibe at Merchants is also nice for us ladies.  I liked it especially for a small, one-on-one dinner or even a family meal, for which they have long tables.  In fact, a family sat at a table next to us and seemed to be having a great time--Merchants' eclectic menu satisfying everyone's needs.
One more thing...if you're squeamish about cigar smoke, don't worry, as the cigar bar is completely separate from the restaurant.  If you'd like to enjoy a cigar after dinner, go right ahead but if you don't care for it, you won't even know it's there.

Food:
As mentioned, Merchants' menu has something for everyone and the cuisine has a variety of influences, from Mediterranean to Asian to good o'l American.

Goat Cheese Salad - I started with this salad because I'm a huge fan of goat cheese.  And on top of that, when I saw that these were goat cheese "croutons" (as in fried balls of goat cheese) I was sold.  There were about 4 croutons, which was just enough, and the salad part consisted of peppery arugula with a tangy red beet vinaigrette.  The portion was large, so after I finished all the croutons, I took the rest home and devoured it the next day.  It was still delicious and I used it as a topper for my pita pizza. YUM!

Point Judith Calamari - Dan is a traditionalist in his starters and usually goes for the calamari.  This one came recommended by Merchants and it was a sound choice.  The portion was large but what was so great is that it wasn't too oily as calamari sometimes can be.  The breaded crust was crunchy and a little bit crumbly, which I liked.  My favorite aspect was the garlicky lemon red pepper aioli that came on the side as a dipping sauce.

Pan Roasted Monkfish - I had my hesitations about this dish but when it arrived, it proved that I ordered the right thing.  First, I took a couple of seconds to admire it--the presentation was so colorful that it drew us in, both of us ooohing and ahhhing.  The fish itself was beautiful - roasted to perfection, with a crispy golden crust and a moist, flaky inside.  If you're put off by monkfish don't be, it's an incredibly gentle white fish and when prepared right, it makes for a delicious and light meal.

The bed of lobster mashed potatoes on which the fish rested were delighful and creamy, while the cheesy asparagus on top provided a touch of indulgence.

Jerk Chicken Sandwich - Dan once again went simple with this sandwich (he's trying to eat lighter), but unlike his experience at Manetta's, this time he wasn't disappointed.  Although sounding ordinary, the sandwich had a mix of surprising flavors that excited the tastebuds.  For example, sliced pineapples, guava preserves and avocado were incorporated, providing a taste of the tropics.  I liked the combination very much and would like to make it at home.

Molten Chocolate Cake - So far our experience was so great that we had to take a stab at dessert.  Molten chocolate cake is an all time favorite of mine so this choice was a no brainer.  While we liked it, it wasn't the best part of the meal.  The molten chocolate took too long to get into and once we got a nice spoonful, I thought that it could've been warmer and the quality of the chocolate wasn't superb.  While the dish was passable, I wouldn't get it again.

Service and Cost:
Our server was wonderful and very caring about our needs.  I liked that he was attentive and seemed genuinely interested in us.  Glasses of water were refilled speedily and all dishes were brought to the table in good time.  He apologized for not checking on us after our entree, but I didn't even see this as an error - he had a good heart and a nice personality, which didn't go unnoticed.

Prices run the gamut and are suitable for every budget.  For example, if you'd like a casual dinner with a sandwich or salad, you'll spend less than $20 on food, but if you're looking for something more celebratory like steak, that's an option too--it'll cost more but it won't break the bank.

If you liked this review and are further curious about Merchants, I'll be doing a gift certificate giveaway later this week.  Check back for more details.