Dinner with the Wandering Foodie at Dinosaur BBQ 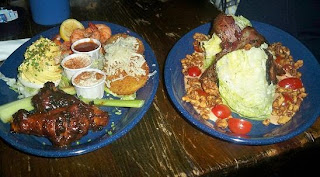 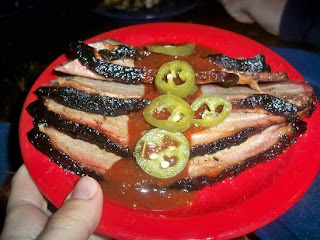 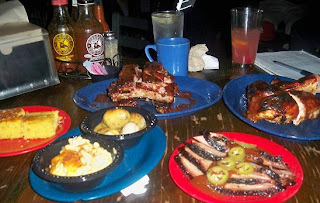 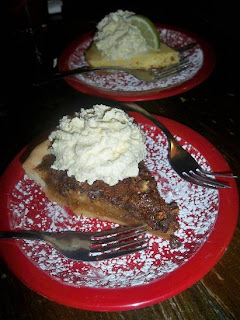 I did something unusual yesterday, and I must say I had fun doing it.  Having dinner with fellow blogger and "wandering foodie" extraodinaire, Hagan Blount proved to be a great experience.

Accompanying Hagan on his 54th stop of the 93 Plates adventure, we found ourselves in West Harlem at the legendary Dinosaur BBQ. Let me tell ya, it was worth it and I'm already thinking about my next visit.

Atmosphere:
Dinosaur was absolutely packed last night for a Monday night--granted it was a holiday.  We walked in and got seated immediately, a total anomaly I'm told for an everyday diner.  But I was grateful for our table--eating with another foodie certainly has its advantages.

I like that the space is expansive and the overall vibe is saloon-like and social.  It's fun to walk into a place that's buzzing with excitement, tables filled with parties both large and small, and in many instances including small children.  The decor is hoakey and kind of random (a humongous deer head hung on one of the walls) but it all works to create a casual and fun atmosphere where you want to stay a while and let your hair down.

Food:
While the atmosphere certainly set the tone for our experience, the food spoke for itself.  The menu was simple but offered great choices that were conducive to sharing.

Appetizers - An item that was a must for us was the fried green tomato.  When we saw this offered as part of a sampling platter coupled with Dinosaur's signature wings, deviled eggs and a spicy shrimp boil, we couldn't resist.  The portion was generous and just perfect for splitting with another person.  My favorite item was the chicken wing, nicely charred on the outside and moist and juicy on the inside.  I loved how meaty it was and despite its claim, it wasn't spicy, but actually quite mild.

Our second app included the Iceberg lettuce wedge topped with signature Bar-B-Blues House dressing, spicy pecans, cherry tomatoes and the most wonderful house cured bacon.  The bacon was my favorite component, as it brought in an irresistible smoky flavor, which paired well with the savory cheese dressing.  The iceberg introduced a little break from the richness, providing a much needed neautralizer in your mouth.  This app was slammin' and I won't miss it next time I come back.

The Main Event (BBQ) - We were explicitly told that not going with the ribs would be a mistake, so we of course chose a meat sampler that included them as a main component.  Our meaty feast consisted of not only ribs but also 1/2 chicken and sliced beef brisket along with two sides and corn bread.  Out of of all the meat, the ribs were the best--their exterior was firm to the bite but the inside was more tender.  The meat separated from the bone but not so much that you didn't have to use your choppers to do the work, which I'm told is a good thing--meat shouldn't break away so easily, there should be some work involved.  The chicken and the brisket were excellent too, again having great flavor and nice moistness.

All this protein was chased with some good o'l carbs including Dinosaur's signature Syracuse Style Salt Potatoes and the mac and cheese.  Hagan strongly preferred the potatoes and couldn't stop raving about them, while I liked the mac and cheese more.  It combined a couple of different cheeses and had a nice well-done crust that we benevolently shared.

Desssert - We ordered key lime pie and a sweet potato pecan pie just to prove that we could stuff another thing in our bloated bellies.  The key lime was disappointing, with a runny custard and an unremarkable crust.  But we were impressed with the sweet potato pecan pie that boasted a crumbly, buttery crust and a slightly savory, crunchy inside.  Topped with fresh whipped cream, it was the only part of the dessert that disappointed me, as the cream was overwhipped and clearly broken.  Can't say I don't understand, but this could use a significant improvement.

Service and Cost:
The staff at Dinosaur is great and seems to know what they're doing.  Our waiter had a clear point of view about the dishes and gave us his recommendations without being imposing.  Everyone seems to have a laid-back, casual attitude, which fits in perfectly with the atmosphere.

Costs are affordable and as I mentioned, dishes are great for sharing.  The humongous bbq platter we shared cost a mere $23.95!  Here's a rundown of the prices:

Here's Hagan's post with me on video for those that want to check it out.