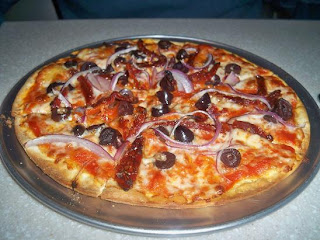 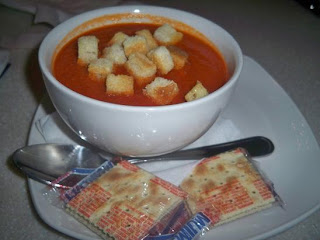 My curiosity has certainly been piqued by Astoria's newest sports bar, YOLO, as people either seem to really like it or hate it.  Dan and I found ourselves there last Saturday night, spending a comfortable albeit slightly unsatisfying evening during the big NY snow storm.

Atmosphere:
I loved what YOLO has done with the space--although narrow, the owners have made it modern and very conducive to watching sports.  There's a big screen TV on the left side, as you come in and several other HD TVs all around.  On Saturday night, they were showing football, which is now the draw, and especially on weekends, as they carry the NFL Sunday Ticket.

Seating is plentiful for small and large parties alike--I especially love the comfy silver booths with convenient foot rests.  There's a bar up front but at the moment, they're not serving alcohol, as they seem to be waiting for their permanent liquor license.  So for now...(drumroll), this bar is BYOB!

Food:
Since we couldn't get beer, we ordered food while watching the game.  YOLO is known for thin crust pizza and homemade meatballs, so we tried to order both but sadly, they were out of the meatballs so I got soup instead.

Tomato Soup - Woah, I was a little put off when I first saw this, as it looked like thick marinara sauce.  Dan agreed, as I picked up my spoon with caution and tasted this orangy-red concotion.  Although it wasn't as thick as marinara sauce, it was just as acidy and a couple of spoonfuls warranted a long break.  Dan tried it too and wasn't impressed - I won't say more except that I do not recommend getting it.

Thin Rust Pizza - Dan ordered a Greek personal thin crust pizza with olives, red onions and regular mozzarella cheese.  Just like the soup, we were underwhelmed, as this dish looked like an ordinary pita pizza that we often make at  home when we're tired.  After taking a couple of bites, Dan pronounced it "meh." I agree "eh, meh..."

Service and Cost:
For all the disappointment with the food, the service was stellar.  We loved our server who was so cordial and apologetic about the lack of liquor (hey, we didn't mind the BYOB).  He was considerate in that he gave us enough time with the menu, and when we were done, he just let us relax instead of rushing us out of there.  I wish I knew his name because I'd praise him more.

Costs are inexpensive - soup was $5 and the pizza was $8.  Other dishes fall into the following range: