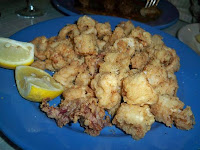 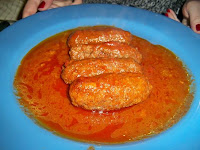 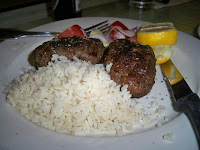 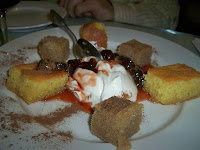 Last Friday, Dan and I ventured to Agnanti, Astoria's most popular Greek restaurant. I can't even recall how many times I've seen this place mentioned on TV and on countless food and non-food related websites. We brought friends, Lauren and Keith in for the ride and while everyone enjoyed themselves, we weren't at all wowed.

Atmosphere:
Agnanti gets super busy at night and especially on the weekends. I made reservations ahead of time and it was a good thing too, the place was jam-packed when we got there. The medium-sized dining room was filled with a diverse group of diners--young Americans, older Greeks, families with kids, the list goes on.

I liked that the restaurant was nice and warm, as it was a particularly chilly evening. In spring and summer months, they offer outdoor seating, which I've taken advantage of. Inside, you'll see lots of nostalgic pictures on the walls and a couple of cool artifacts that showcase Agnanti's history. One thing in particular that I love is the old hearth (which was actually turned on) with nice-looking clay pots, jugs and containers--it's evident that this place brims with personality and history.

Food:
Sampling Agnanti's food once before, I knew that it would be good. While I was impressed the first time, this time I was slightly underwhelmed. My experience was no doubt tainted by the strange service but I think that the food suffered too. We ordered the following:

Melitzanosalata (eggplant spread) - One of Agnanti's signature dishes, I've tasted it before and once again, loved it. While my dining companions thought that it looked unappetizing, (it was grayish in color), I thought that it simply resembled mushed eggplant with garlic. The taste was strong and very garlicky but somehow it agreed with me. It was delicious when smeared on warm pita wedges, which we had to order separately. This seemed strange to me--how could you eat spread without a palette?

Tomatokeftedes (tomato croquettes) - We tried to order more veggie dishes to accommodate our dining companions. I recommended this because I've tasted it once before and remembered it being nice, light and quite different from traditional croquettes with creamy fillings. They were juicy and fragrant from the herbs but also a little oily--and the outside wasn't as crispy as you'd expect. Next time, I'd love to try the cod croquettes or even the zucchini/cheese croquettes.

Fried Calamari - Despite Agnanti offering so many interesting seafood dishes, we went for this simple one because it's Dan's favorite. The large, piping hot plate looked impressive and the calamari tasted good too. It was fresh and the batter in which the calamari were fried was crunchy and yummy. Dan disagreed with me--he thought this dish lacked something, which he couldn't identify and I don't think that he'll get it again.

Soutzoukakia from Smyrna (meat balls) - Three of us ordered the meatballs for our entree, as they sounded simple and good. While the meat itself was tender and flavorful, I think that the sauce took away from it. It was on the bland side and not something representative of a Greek dish, in my opinion. I liked Dan's biftekia much better because it didn't need sauce to compete with its delicious flavors. My dining companions agreed with me--they weren't completely enamored with the meatballs either.

Biftekia - Dan ordered this Greek specialty, which I've tasted before at other restaurants. While simple, it was a home run. The meat was light, seasoned with Greek spices such as oregano and thyme, delivering an earthy flavor. Served with white rice and veggies such as tomatoes and onions, it was refreshing and hearty enough for dinner but didn't leave you feeling overstuffed.

Dessert - Agnanti offers complimentary dessert, consisting of Greek yogurt topped with a sour cherry compote and cinnamon. It's surrounded by semolina cake squares, which aren't flavorful on their own but are quite delicious when paired with yogurt. While this isn't a traditional, rich way to end a meal, I really loved it because it made for a great palate cleanser. Dan didn't agree--I think he was looking for something more traditional like chocolate or ice cream.

Service and Cost:
Similarly to last time, the service was hot and cold. It started out well and our server was attentive. Toward the middle of our meal however, we were asked to switch tables because Agnanti didn't plan accordingly for a big party. We were gracious enough to switch our table, which was both disruptive and annoying. Our new table wasn't as private as the first one and we felt squished. It was nice that Agnanti offered us a free round of drinks for the inconvience but the service continued to plummet. Orders were brought out at the wrong time and we couldn't help but feel forgotten. There is much room for improvement as far as service is concerned.

In terms of cost, it was inexpensive to moderate. Dinner, including one round of drinks set us back about $30 per person with tax and tip. Appetizers range between $ 6 - $12.50, entrees are between $7 - $21.50. Portions are generous and dessert as mentioned, is complimentary.