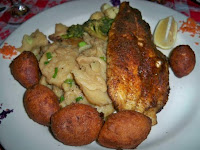 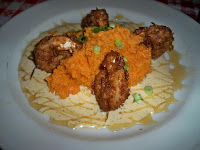 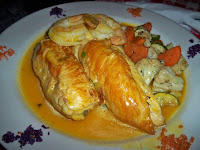 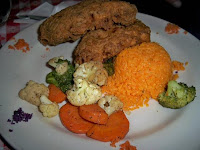 Mardi Gras - 70-20 Austin Street, Forest Hills 11375
718.261.8555
E/F/G/R/V Train to Forest Hills/71st Avenue
www.mardigrasnyc.com
Last weekend Dan and I ventured to Forest Hills where we visited friends, Carrie and Neil. They were eager to show us around, and we ended up on the well-known Austin Street, eating at Mardi Gras restaurant. The food was packed with zing and personality, showcasing the colorful flavors of Cajun cuisine.

Atmosphere
Like its name suggests, there's nothing serious or formal about Mardi Gras. It's all about color, personality and a lot of fun. The space is extensive and boasts two levels--the downstairs features a large bar while the upstairs holds prime table real estate. It's more desirable to sit upstairs, as it's a lot warmer and the overall vibe is more boisterous. Although we went to Mardi Gras in the evening for dinner, I could see this place being conducive to watching sports games such as football--especially at the downstairs bar.

Food:
Since I have an affinity for Cajun-style cooking, I enjoyed the food very much. It wasn't too spicy and it had great flavor. The portions were extremely generous and if I wasn't as ravenous as I was that evening, I probably would've taken half of my portion home. Here's a sampling of our dinner:

Coconut Shrimp - This was our appetizer and it was absolutely gargantuan. Four jumbo shrimp, fried and dipped in coconut honey--how could it get better? But the decadence didn't stop there. The shrimp were surrounded by a soft, yummy mound of sweet potatoes, while the whole thing floated in coconut honey sauce. It was a delight to dip the shrimp into the honey--I've never tried that pairing before and I found it complimentary.

Catfish Platter - The number one thing that attracted me to this dish were the hush puppies (aka fried cornbread). I adore this side and thought it would go well with the catfish. Both were fantastic and the fish was perfectly cooked and blackened. Another tasty aspect of this already rich plate was the Cajun hash, which had green onions and smoky bits of ham. It was incredibly tasty and a step up from your ordinary homestyle potatoes.
Cajun Fried Chicken - Fried food is Dan's weakness and he just had to have this. Unfortunately, he was disappointed with the batter in which the bird was fried. I tried it too and liked it very much, especially because it was slightly sweet. Dan on the other hand didn't agree and took all the skin off, eating only the juicy meat. It was sad to see all that fried goodness go to waste.

Stuffed Bronzed Chicken - This was Carrie's entree and it also sounded good, as it was stuffed with spinach and mushrooms. I think this was the biggest portion yet because Carrie had a hard time finishing it and took most of it home. I didn't try it but Dan devoured one of Carrie's jumbo shrimp cooked in white wine sauce. Once again, it was rich, flavorful and delicious.

Sirloin Steak - Neil didn't hesitate for a second before choosing the steak--it's apparently his favorite. Topped with a garlic white wine sauce and sauteed onions, this was a manly dish. It looked juicy and we didn't hear any complaints from Neil, so we assumed that it lived up to expectations.

Service and Cost:
Our waiter was quite entertaining and especially when he recited a list of what felt like never ending daily specials in robotic monotone. He cracked a smile in the middle of his monologue, and we were glad because we had a hard time keeping a straight face. But all joking aside, he was knowledgeable about the menu and our food came out relatively quickly. Getting the check was seamless and overall, the service was solid.