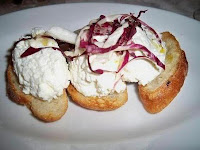 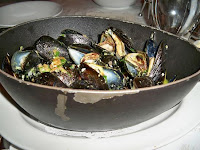 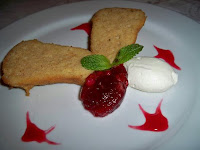 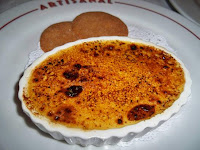 Kimberly was here visiting from Chicago about two weeks ago and together with Lisa, we had dinner at Artisanal Bistro. We've been curious about this restaurant for quite some time, especially after the fun wine and cheese class that Lisa and I took there. When we found out that they offered a three course, pre-theater dinner for just $24.50, we knew that we couldn't refuse.

Atmosphere:
Artisanal very much fits in with its neighborhood--it's large, upscale and I imagine it's a place where business lunches and dinners are conducted. But despite it co-existing in a corporate environment, it feels comfortable, friendly and even homey. The minute that you step in, the noise of casual conversations envelops you, and you can't help but feel like you're in a busy French square rather than in a Manhattan restaurant.

Known for its vast variety of cheeses, Artisanal is also referred to as a fromagerie. It features a "cheese cave," a temperature controlled room used to age some of the most exotic artisanal cheeses. And while some people get turned off by the smell, I found it wonderful and a nice way to work up an appetite.

Food:
We clearly knew why we came--for the $24.50 pre-theater special. While this prix-fixe is only available between 5:00pm and 6:30pm, it's definitely worth dining early for because it doesn't leave you unnecessarily full late in the evening. So do as the French, and eat early! Here are some of the items that we ordered:

Sheep's Milk Ricotta Tartines - Apparently these are pretty famous, and I saw them featured as Chef Brennan's specialty. Seeing as cheese is done very well here, I decided to order them. The ricotta was the freshest I've ever tasted and as milky white as they come. The soft, airy quality of the cheese was also lovely and it was topped with crunchy strips of radicchio and a drizzle of honey. The sweet with the bitter was a great combination, and the dish overall set a high standard for things to come.

Moules Frites - I was really looking forward to trying the mussels, as they're usually delicious in French restaurants. This one was no exception and it ranked as one of the top three moules frites I've ever had. The excellence of this dish was in the sauce, which had just the right amount of garlic, tomatoes and parsley. There was so much of it, that when I finished all of the mussels, I was able to dip several pieces of bread--and even my French Fries--into it.

Creme Brulee - A typical French dessert, I had to see how it was done here. Although it was creamy and luxurious on the inside, the outside crust was slightly burned, which bothered me. In every bite that I took, I tasted bitter, burnt sugar and it was unpleasant.

Baba au Rhum (Rum Cake) - This was a winning combination--soft warm cake coupled with raspberry preserves, fresh whipped cream and a sprig of mint. The cake dough was light and fluffy with only the slightest hint of sweet rum. It was especially nice to top a forkful with whipped cream, as it neutralized the strong flavor of the raspberry preserves. Both Lisa and I agreed that this was the preffered dessert choice.

Cheese and Wine Flight - Kimberly decided to get a sampling of three seasonal cheeses and three Spanish wines. She seemed satisfied despite the small cheese portion. I think that because the cheeses were so rich and fresh, the portion was perfect and Kimberly had no complaints. The wine sampling was also served in smaller glasses so don't expect to get three full glasses of wine if you order this.

Service and Cost:
Our waitress was quick and efficient--and surprisingly down to earth, given the upscale environment. Because the restaurant got super busy, she seemed to disappear at the end of our meal and we had to flag her down to get our check. She was really nice however, especially because she let us get the pre-theater special, despite us arriving a few minutes after 6:30pm.

The cost of our meal was very affordable at $24.50 a piece for the food and about $10 extra for wine. Kimberly ended up paying about the same amount for her wine and cheese flight. However, if you're not taking advantage of the pre-theater special, dinner will set you back at least $40 per person without alcohol. This place is not cheap but if you're smart about it, you could make out like a bandit.