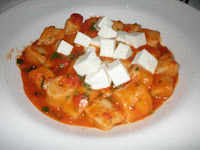 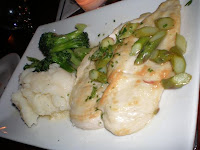 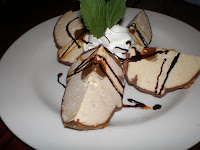 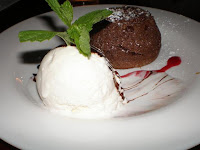 Locale - 33-02 34th Avenue, Astoria, NY 11106
718.729.9080
N/W Train to Broadway
www.localeastoria.com
This was my second time at Locale and I enjoyed myself even more than the last time when I came for brunch. The food was better and the company was equally great--our friends Lauren and Keith came out to see us from Long Island. We wanted to bring them out to a cool, funky place that was nice enough for a Friday night treat but laid-back enough where we could casually enjoy each other's company. Locale delivered on all accounts.
Atmosphere:
Even though I've described Locale's atmosphere in my last review, I have to point out that I much rather preferred its setting for dinner than for brunch. The lighting is dim and creates an intimate mood, accentuating the shabby-chic decor of Matisse-like paintings and exposed brick walls. It was a perfect way to spend a Friday night dinner with friends but I'd also recommend it for a quiet romantic dinner.
Food:
Locale offers a mix of Mediterranean fare, from pasta and paninis to chicken, meat and fish. Everything was prepared well and tasted fresh. Although not everything stood out, for the most part, the dishes met and even in some cases exceeded expectations.
Gnocchi Sorrentina: I chose this dish because I wasn't in the mood for anything meaty and because I have a soft spot (no pun intended) for gnocchi. Locale's version definitely delivered. First of all, they were enormous and so soft that they melted on my tongue. The tomato sauce, which they were dressed in was fresh and had a nice crisp flavor. There were medium sized chunks of fresh mozzarella resting on top--they melted slightly from the hot gnocchi and sauce, making it even more delicious. I'd strongly recommend this dish for dinner.
Rigatoni Bolognese: This was Dan's dish and he had a hard time deciding between that and the Frutta di Mare pasta special. After opting for the Bolognese, he was more than satisfied with his choice. I had the pleasure of tasting this and it was all that a Bolognese should be--chunky, meaty, hearty and the pasta was cooked al-dente. I especially liked that the pasta was a small version of rigatoni--it made the meat easier to scoop up.
Other Entrees: Keith ordered the Tuna special, which was mixed in with penne, garlic, radicchio and black olives. While this sounded amazing it was a bit on the salty side and Keith wasn't overly impressed. It's unfortunate and true that specials could be a hit or miss situation. I read somewhere that too many specials could mean that chefs are trying to get rid of old ingredients--except in a place like Trattoria L'Incontro, where specials are what you come for.
Lauren got the lemon chicken and I think she liked it. She wasn't too vocal about it, which made me think it was just OK. It looked light and nothing too out of the ordinary--I certainly wouldn't call it a stand-out.
Dessert: This is where Locale turned up the heat and even before I start describing our desserts, I'll say that I very much recommend coming here for this course alone.
The first dessert, The Decadent Bomba (don't quote me on the "decadent" part) was a 3:1 consensus--I was the difficult one because of my slight aversion to peanut butter. But when this dish arrived at our table, it was so beautiful that I couldn't resist a taste. It reminded me of tartufo and this one was made up of peanut butter gelato with a chocolate center, embellished with caramel sauce and more hot fudge. Lauren, Keith and Dan absolutely loved it and Dan couldn't stop talking about it the whole weekend.
The second dessert was a great standby, which we got mainly for my sake--the Chocolate Molten Lava Cake. Again, it was out of this world and the chocolate was a perfect mix of heaven and luxurious decadence. The fresh vanilla bean gelato that accompanied it was also excellent, providing a refreshing contrast to the warm chocolate--a pure and simple must in my book.
Service and Cost:
Our waiter was really nice and very enthusiastic about the menu. When asking him for recommendations, he replied with effusive but believable raves such as "I LOOOOVE the Frutta di Mare" or "The Bolognese is also GREAT." Nice guy and a good server. The only thing that irked me a little is that he seemed impatient with us at the end of the meal and told us that people were waiting for our table (hint, hint). He was just being fair I guess, and if I was on the other end of that I'm sure I would've appreciated his tenacity.
Cost-wise, Locale is pretty moderate and won't hurt your wallet. Pasta ranges between $11.95-$15.95, chicken dishes range between $12.95-$19.50 and dessert ranges between $3.50-$7. Dinner cost us about $36 per person including tax and tip--not bad.