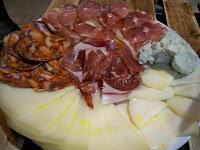 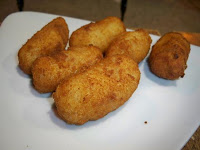 El Valladolid Majaderitos- c/. Cadiz, 9
91 531 08 63
28012 Madrid, Spain
We ended our two week vacation in Madrid--and what a fabulous finale it was. The weather was beautiful, the sights were even better and the food was incomparable to any Iberian cuisine we've ever tasted.
Occupying our time by walking and sight-seeing during the day, we ate on the late side and decided to keep the portions small with tapas. Although we had no problem finding a tapas restaurant--there were actually hundreds of them (literally)--we had a problem finding just the right one. The dilemma was: going to an ultra expensive tourist trap with mediocre food or going to a more authentic joint where the atmosphere suffered. Luckily, we chose neither because by sheer luck, we found a back alley with some of the most authentic--and charming--tapas restaurants.
We decided on a place called El Valladolid Majaderitos, which offered outdoor seating in a narrow alleyway, populated with about ten other tapas joints. The staff seemed friendly enough and the menu appeared to be less expensive than the rest. We peeked at some of the food too and it looked so fabulous that we just had to stay.

Problem one was the menu, which was entirely in Spanish. Helpful hint if you're travelling in Spain--Spaniards do not like to speak English unless they absolutely have to. We found that even if we tried to speak English to someone who understood it, they'd reply in Spanish.
Problem two, the prices--they seemed a lot higher than what we initially saw on display. Was this a trick? Was this indeed a foolish tourist trap? Dan went to investigate and unfortunately, the lower prices were only offered inside the restaurant. Boo, we were disappointed--we fell for it.
Anyway, we tried to decipher the menu as best as we could and from the help of our nice waiter, we chose two tapas: the house plate of cured meats and cheeses and ham and cheese croquettes. We also ordered glasses of house sangria to see how it stacked up to the sangria in the States.

Ham and Cheese Croquettes - Here I thought that I was having the real deal in the Canaries but truthfully those croquettes didn't even stand a chance next to these. First off, they were twice the size and shaped like oval sausages instead of round balls. The breading on the exterior was super crispy and you could tell that they used fresh breadcrumbs--once you bit into them, you immediately slipped into cloud nine. They were soft, stringy and had a lovely smoky taste from the aged ham--or Jamon Iberico. Perfect pillows of perfection, I'd call them.
Cured Meats and Cheeses - Another goodie, this platter came full of various cured meats and fresh cheeses. The meats included chorizo and two types of ham--Jamon Iberico and another ham which was leaner but I'm not sure of the name. The chorizo was my favorite and although it didn't skimp out on fat, that was probably what made it taste so great. It had a smoky pepperiness that definitely aroused the senses. And once I coupled it with yummy fresh blue cheese, it gave the tongue a gentle sting, further awaking my mouth.
The blue cheese was the sharpest of the three while the other two were more milky, yogurt based cheeses. I preferred to pair those with the Jamon Iberico or the other ham on the plate--it created a gentler combination after the intense blue cheese and chorizo. Overall, we loved this simple dish so much that by the end, it was almost all gone.
Sangria - This was the real thing--sweet but not too sugary and slightly carbonated. It came in a generous glass or "copa" and was packed with a plethora of fresh fruit such as oranges, apples and even kiwi. The great thing about sangria in Spain is that along with your glass, they give you a little spoon to pick out all the fruit. I like this a lot and think that we should adopt this custom in America.
Service and Cost:
The service was really fast and friendly. Although our waiter didn't speak much English, he was eager to help us decide on our selections.
The meal that I just described set us back about 37 Euro, including tip. This is approximately $48. Kind of pricey for tapas but the portions were generous and we were full. I'd definitely recommend this place if visiting Spain. Muy bien!
3 Mmmms
Posted by Fooditka