Il Bambino - Paninis Worth Showing Off 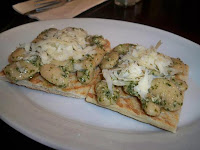 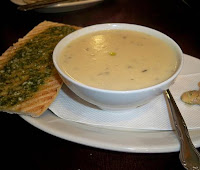 Everyone loves Il Bambino. After all, what's not to love about this adorable panini shop with delicious bread, hearty soups and gargantuan cupcakes.

I decided to show it off to my co-workers, Leann and Frank this week, as we took a day trip to LIC for work purposes (of course). They both seemed to like our charming little paninoteca, and we enjoyed a leisurely lunch in its not so crowded dining room. In fact, it was so relaxing that we stayed a while just chatting.
Besides the paninis, which Leann and Frank devoured, we also ordered the following new items that I haven't yet tried:
White Bean and Pesto Crostini - Whenever I think of crostini, I think of really crunchy, toasty bread. Il Bambino's crostini are that and more--they're crispy and chewy, which makes them easier to eat (but not easier to cut). Ours included a topping of large buttery cannellini beans, which had good texture and were paired with Bambino's signature chunky pesto. And if that's not enough, this yummy bread was also enhanced by a sprinkling of fresh Pecorino Romano cheese. It was the perfect Italian starter--bite-sized and bursting with flavor.
Baked Potato and Leek Soup - Having a good experience with soup the last time that I came here, I decided to get it again. This one was just as good, if not better. Even though the potato was the dominant ingredient, you could still taste the lovely hints of leek and onion. And just like last time, it was served with a generous piece of crusty bread that was topped with garlicky pesto. It was great to dip the bread into this hearty concoction and by the end, I was very full. What good value, I thought--a full tummy for a mere $5.
Service and Cost:
Our waitress was nice but a bit slow with service. She was too laid back and we kept having to signal to her to order and then to get the check. It wasn't horribly annoying just slightly inconvenient.
Cost-wise, Il Bambino won't hurt your wallet. For two paninis, a crostini and a soup, our check came to $28--without tip.
I was glad to show my co-workers our panini gem. Astorians, if you haven't yet checked it out, I strongly encourage it!
Il Bambino Cafe - 34-08 31st Avenue, Astoria, NY 11106
718.626.0087
N/W Train to Broadway or 30th Avenue
www.ilbambinocafe.com
Posted by Fooditka