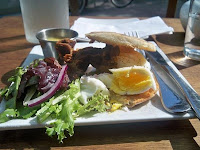 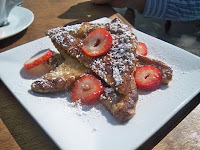 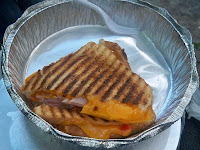 My brother and I decided to go to an impromptu brunch this morning at Kafene. I've been there once before, experiencing disappointing service and mixed messages. When I went in today, I was hoping that things would improve--but sadly they didn't. The service was confusing and inconsistent and the food seemed to regress in taste--from good to less than mediocre.

Before I even go into the details of our meal, I'd like to point out that we waited almost a half hour for the below egg dishes. Here's what we ordered and attempted to eat:

French Toast - This was my brother's dish and what attracted him to it was the mention of fresh berries and Greek honey. When it finally arrived, he was relatively happy with it, as it was sweet, moist and a little crunchy on the outside. I tried it too, as I was terribly hungry because I had to send my dish back. I liked the French toast but didn't think that it was spectacular--I much rather prefer the one at Ovelia and Indigo.

Poached Eggs - I was excited for this dish because it came with bacon, home fries and my favorite--runny, poached eggs. Impatient and hungry after the long wait, I was deflated to discover that my "poached" eggs were actually hard-boiled. On top of that, the bacon was shriveled and dry. Overall, the plate looked depressing and unappetizing--and what was even worse was that my hunger was intensifying. Naturally, I sent this dish back because it was unacceptable. The gracious waitstaff didn't take no for an answer and offered me the following:

Greek Toast - I was impressed by the admirable attitude of the waitstaff when they saw how unhappy I was with my eggs. They whipped up Greek Toast for me to-go in about ten minutes. I appreciated the gesture but I was in a hurry and they just didn't seem to understand that (even after I told them so repeatedly).

The toast itself was nothing to brag about--another sad looking number with processed cheddar cheese, which was too orange. The ham and tomatoes that came with the toast were good but the cheese was overpowering. I couldn't help but think that I could've made something better in my own panini press.

Service and Cost:
While the waitstaff responded positively and generously at my discontentment, they were disorganized and confused throughout our dining experience. It just didn't seem like they were a cohesive unit, but running various disjointed operations. For example, our silverware was set twice, which was probably the result of bad communication. After I expressed my disappointment with my dish, we had about 3 different waitresses come over and talk to us--it just didn't make sense. Although everyone was polite and cordial, I think that Kafene still has a lot of work to do in terms of waitstaff training.

I didn't end up paying for my dish, as well as I shouldn't have to because of the unsatisfactory outcome. My brother's toast was $9, which is reasonable--and most of their brunch dishes are also in that range. It's your call if you'd like to visit Kafene but don't say that I didn't warn ya.