Mercadito Cantina - A Tasting to Remember 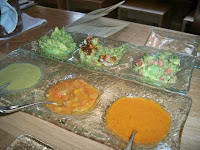 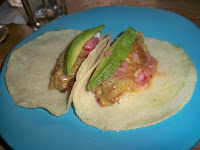 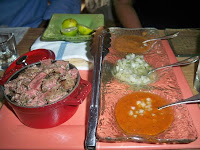 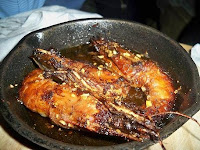 Mercadito Cantina - 172 Avenue B, New York, NY 10009
212.388.1750
L Train to 1st Avenue
www.mercaditony.com
Mercadito Cantina is the newest addition to the budding Mercadito empire. It officially opened just under a month ago and I've been curious about it since. Ironically, I had plans to go there with Lisa but then got an invitation for a private tasting so I opted for the latter. Our experience was fabulous and we'll be bringing back the boys for some stiff drinks and tasty tacos full of organic ingredients.
Atmosphere:
There's one word sums up the look and feel of this place--communal. I mean this in the best way possible, as the communal atmosphere at Cantina fosters interaction and camaraderie between patrons. Lisa and I got ourselves acquainted with our neighbors, sparking up a conversation that led us all the way to meal's end--it was fun and made the evening even more enjoyable. I think that we lucked out with our neighbors but I can also see this as a drawback if you're stuck next to some dreadfully loud and annoying patrons.
Cantina's decor is simple, clean and casual, with light wood paneling on the walls, tables and stools. It reminded me of another communal-style eatery in the neighborhood--Momofuku Noodle Bar--and I wonder if that's where Cantina got its inspiration.
The acoustics could get loud here but you get used to it quickly--we did. This happens around 7-ish and lasts throughout the night so just know that you won't get any quiet here.
Food:
Both Lisa and I have been to Mercadito, across the street, and had an idea about the cuisine and flavors that would be offered. We were super excited about the drinks especially, remembering the wonderfully fresh mojitos we had at Mercadito. Cantina didn't disappoint and brought the food to a new level. Here's some of the amazingness that we sampled:
Guacamole Trio - This stood out for me at Mercadito and now at Cantina as one of the most flavorful and innovative guacamoles I've ever had. The three flavors included sandia (watermelon), mole poblano (with mole sauce and plantains) and tradicional. While the traditional had excellent flavoring, the watermelon was my favorite. The sweet crunch of the small watermelon cubes mixed with the soft buttery avocado was a perfect start to the evening. I adore a mix of sweet and salty and this definitely did me in.
Salsa Trio - A delicious complement to the guacamole, we decided to mix the two--we dipped into the guac first and then topped it with the liquidy salsa. Two of our salsas were warm, which was a nice juxtaposition with the room temperature guac. Our salsa varieties included verde (with tomatillos and chiles cerranos), habanero (grilled tomato with habanero) and the third one I cannot recall except that it was the chunkiest, with tomatoes, chilis and garlic. I preferred the creamy, warm salsas best and would definitely recommend the verde, which was zesty and crisp from the cilantro.
Tortilla Chips - A quick note about these--they're homemade and absolutely delicious. They're as light and airy as can be and not oily. You can tell that they just came out of the frier with every crunchy bite. Fabulosity in a bowl!
Crispy Corn Bread - Just when I thought that no one could top Blue Smoke's hush-puppies (fried corn bread), Mercadito Cantina convinced me otherwise. Their crispy corn bread literally stopped Lisa and I in our tracks--it's crunchy on the outside and sweet and almost dessert-like on the inside. Each bread was bite sized, making this starter highly addicting. I asked our server about these and he mentioned that they're the most popular item on the menu. I'm not surprised--just writing this is making me want them!
Tacos Estilo Baja - These tacos were again unlike ones we've ever tasted and we chatted about them for days after. They included beer battered shrimp, roasted habanero avocado and cole slaw. The shrimp was delicious with a hint of sweetness from the beer and the cole slaw was crunchy and fresh. Although this dish was fried, just like the corn bread it didn't taste greasy, proving that the ingredients are top notch.
Tacos Pescado - A tilapia taco, it was dressed with tomatillo garlic mojo and fresh avocado. I'm usually not the biggest fan of fish tacos because they're really hard to get right--the fish can be overcooked and funky-tasting--but not here. The tilapia fell apart on contact and the mojo was refreshing. The fact that these tacos were easy to maneuver was also good--they weren't unnecessarily overstuffed.
Taquiza Carne Asada - This was a mini taco tasting complete with Cantina's famous carne asada--marinated grass fed skirt steak. The fixins included tortillas, two types of salsas, onions, cilantro and limes. The carne was prepared to perfection at medium-rare therefore, making it easy to handle. Like the chips, the tortillas were also homemade--they were perfect little blankets for all that delightful beef. I'd recommend this in a second--the only thing I'd suggest is to split it with more than two people, as the portion was very large.
Camarones Al Ajillo - One of my favorite Mexican dishes of all time, I was pumped to see this included in our tasting. The shrimp was served in a rustic fashion with the heads and antennae still attached but those came off easily. The garlic was pungent and melted on your tongue immediately--and the shrimp permeated with a garlic sauce that was the bed for this dish. I just wished I had some tortillas left over so I can savor the garlicky sauce till the very end. Fabulous!
Flan Duo - I can't believe that we actually fit this into our bellies at the end of the night. The two varieties included traditional vanilla as well as one made with caramelized goat's milk. Both were spectacular but the goat's milk version stood out as more luxurious--it was silky smooth and very light. Lisa and I both exclaimed when we put this in our mouths "Wow, that's freakin' amazing!"

The Drinks - Lots and lots of liquor was consumed throughout the night but like all of the food we had, it was fresh and very light. It was strange but both Lisa and I couldn't believe how "unaffected" we were by Cantina's drinks. And no we are not alcoholics, we're actually both embarrassing light-weights so we couldn't figure out the tricks that Cantina was pulling.

We sampled their famous tric-quila, which is actually made with sake but tastes just like tequila--Lisa and I both had our own shots which were muy fuerte. We also had to have their famous mojitos, made with the freshest lime juice and mint that you've ever had. Another new drink that I tried was the marilyn manzana, which was like a white sangria made with tamarind and apple soda--it went down way too easily

Service:
The service was outstanding and super attentive--probably because we were on a tasting but still we felt special and important to Cantina's staff. Everyone was really helpful in explaining what everything was and the different processes used to produce these incredible results. We had the pleasure of meeting the talented chef himself, Patricio Sandoval. He was all smiles despite being on crutches with a sprained ankle--now that's dedication!