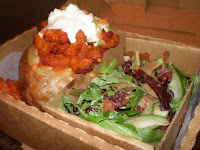 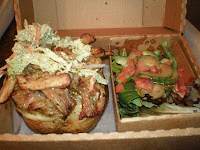 Totally Baked - 8 West 18th Street, New York, NY 10011
646.336.6118
N/W/R/4/5/6 Train to Union Square or F/V/L Train to 14th Street
Totally Baked is feeling happy, euphoric, amused to the point that you laugh for no reason and most importantly you feel full! Ummm please rewind? Full!? Isn't the effect usually the opposite? What kind of magic baking are they doing?
Ok, we can all get our minds out of the gutter because Totally Baked is not what you think--it's Manhattan's new baked potato bar, offering unique spins on the beloved starchy spud. My work colleague Harris and I lunched there today and we're still baked (um, I mean full).
And though TB's spudniks come at a premium, ($7 - $55) these are anything but your plain ol' taters.
Atmosphere and Service:
The vibe is cool and the decor is minimalistic. Upon stepping in, you're greeted by a saccharine staff. I've heard people actually complain about the niceness of the staff and I now know what they meant. It seems like the staff almost has to act that way or they'll be nixed from their baked potato ambassador-ness. And that's exactly where the problem lies--are they really that nice or are they being fake? Who knows and who cares. Although the staff can get annoying, you deal with them for less than 5 minutes, as this is not a table service kind of place.
Some noteworthy aspects of TB's decor are the Mr. Potato Head figurines at the register and the original Mr. Potato Head sketches on the walls. The counters have modern containers filled with chives, which I found clever and really nice to look at. The only thing that's a bit unfortunate is that TB doesn't have traditional tables--instead it seats customers at long counters with semi-uncomfortable stools sans back rests.
The Potatoes:
And this is the reason that I'll be coming back here and trying all of their 15 varieties of potatoes--they're phenomenal! The two that we sampled today were:
Pulled Pork (with pulled "pernil" or Puerto Rican pork and Mexican slaw) - This was my tater and I destroyed its core and its jacket. How could I not? The inside was oozing with flavor and the juices from the pork and the slaw melted the inside, giving it a mashed consistency. The pork itself was soft and succulent and tasted slightly charred from the grill. The slaw made this dish even better because it was crunchy and refreshing--the combination of the hot (pork) with the cold (slaw) was very pleasing to the palate. It was like a mini BBQ inside a potato--ingenious!
Buffalo Chicken (with spicy chicken, blue cheese, carrots and celery) - Can we say Monday night football on a plate? I know so many guys who are probably salivating at the sound of it. Although I didn't sample this dish, I was thoroughly impressed with its fixins--the pieces of chicken were generous and the blue cheese looked oooey-gooey. Harris liked it too and said "it definitely hit the spot." I'm happy to report that he also put his buffalo chicken spud to rest--skin and insides, nothing was spared.

Both potatoes came with a small and tasty side salad with a house dressing. The veggies were fresh and juicy, nice complements to the starch.

Cost:
As I mentioned, TB is not cheap but it will not break the bank either, except if you get the truffle butter potato for a whopping $55. The majority of potatoes range between $7-$10 and you could even make your own for $7. Dessert spuds are made with none other than the sweet potato ($7) and you'll also find this ingredient in their gelato, $4.50. Salads are available for $9-$11 but why get salad here?
I hope that I've convinced you to get totally bake-aked!