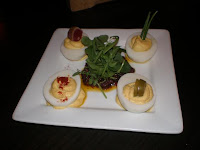 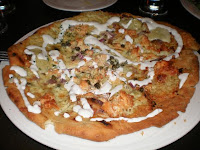 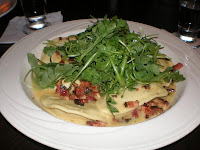 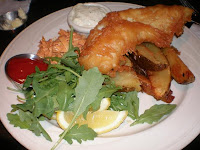 Grafton Street - 1230 Massachusetts Avenue, Cambridge, MA 02138
617.497.0400
Red Line T to Harvard Square
www.graftonstreetcambridge.com
I was originally looking forward to trying Boston's trendy South End eateries but when that didn't materialize, we opted for a trusty standby--good ol' pub food. We ended up at Grafton Street in Cambridge, which is a modern take on old fashioned pub grub. We were pleasantly surprised by the supple menu and everyone had a chance to try something different.
Atmosphere:
Grafton Street looks and feels like a cross between a modern chain restaurant and a pub--the lighting is dim, the wall decor is whimsical and the atmosphere is social. The space is pretty extensive and they're great at accommodating larger groups. Our party of six was able to sit comfortably at a semi-private area set off from the other tables--there was even a retractable curtain to give us extra privacy. A cool centerpiece that we all admired was the oversized lamp, positioned directly above our table--it was definitely a show-stopper that seemed inspired by Asian culture. A bit out of place I thought but nonetheless cool and different.
Food:
The menu offered a lot of variety and we all took advantage of it, as everyone ordered something different. Some dishes were expected staples (Fish and Chips, Cobb Salad) but others were inventive and surprising (Deviled eggs 4 ways, Atlantic Salmon Pizza). Here is a sampling of our diverse dinner:
Deviled Eggs 4 Ways: This was one of our starters and we chose it because it presented an unusual spin on a classic dish. The four variations included grilled tuna, queen olives, chives and olive tapenade. In all of these, the yolk was luxuriously creamy and my favorite variation was the tuna--a). because I've never had it before and b). because it had a delicious smoky taste.

One Perfect Cheese: Another unexpected starter, this one was an embellished cheese platter. Warm crusty bread was the centerpiece, surrounded by four corners of toppings--cheese, honey, an assortment of toasted nuts and dried apricots. While this plate was incredibly simple, stacking all four toppings on the bread made it come to life. The best part was drizzling the honey on the nuts and cheese--a decadent treat.

Atlantic Salmon Flatbread Pizza: This combination was quite different from a traditional pizza and included grilled salmon bits, dill havarti, shaved red onions, horseradish cream and capers. The only pizza-esque thing about it was the crust! I enjoyed it immensely because of its crunchy (not greasy) dough. The horseradish sauce was creamy and surprisingly gentle--it awakened my senses in a pleasant way. I know that salmon could sometimes be overcooked and fishy but this one was super light and grilled so well that I was able to eat most of my portion.

Other Dishes: Some of the other entrees that were devoured included Peter's Sweet Potato Agnoloti (pirogy shaped pasta filled with sweet potato and topped with bacon, brown butter, lemon and baby arugula), Fiana's Butternut Squash Risotto (topped with cranberry jam, sage and pecorino), Mami's Roast Half Chicken (with grilled Brussels sprouts and potato puree), Oci's Fish and Chips (beer battered cod with house cured steak fries, spicy tartar sauce and coleslaw) and Ida's Grilled Chicken Cobb Salad (with all the traditional fixins). While I tried almost all of these, my favorite was Peter's pasta dish. It tasted like dessert from the sweet potato and the thick bacon was spectacular.

Service and Cost:
Our waitress was a young college student, I presume. She was bubbly and knowledgeable and knew when to probe us and when to leave us alone. Our dishes were nicely spaced out between the starters--I hate it when the main course comes right after you finish your apps.

Dining here is very affordable, given the large portions and the quality of food. Appetizers range from $5.95-$13.95, entrees from $7.95-$18.95 and dessert from $6.75-$7.95. They also brew a variety of fresh teas from Irish Breakfast to China Green--all teas are $3. Your wallet will not suffer when dining here, especially with large groups.