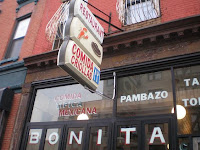 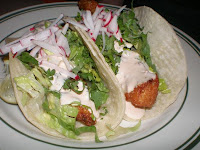 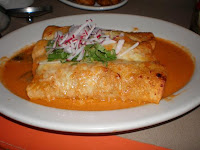 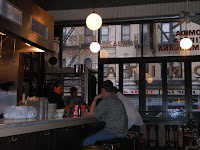 Bonita - 338 Bedford Avenue, Brooklyn, NY 11211
718.384.9500
L Train to Bedford Avenue
www.bonitanyc.com
My co-workers and I eagerly ventured to Williamsburg last night, led by fearless-leader colleague (and guide) Virginia. She lives in the 'burg and was happy to introduce us to some famously delicious eateries. Our original plans were to try the quaint Miranda restaurant--serving Latin American and Italian cuisine--but when a private party got in our way, we gladly capped off the day with sangria, enchiladas and tacos at Comida Tipica Mexicana Bonita.

Atmosphere:
Bonita is a preserved 1927 Brooklyn diner. It's located on the ground level of a Brooklyn brownstone--a gorgeous old brick building which brings you back in time. In my eyes, the cool aspects of Bonita are in fact some of its original touches--a long diner-style counter that faces the kitchen, simple stools and chairs that look like they came from your grandmother's kitchen, the high ceilings and the round ball light fixtures that just say the 1950's.
Yet as retro as Bonita feels, it's also very now, very hipster and very Brooklyn. The crowd that hangs here is young. They're trendy urbanites that come by for a drink and some trusty Mexican eats. The space is large and you'll find both, small private tables tucked away in the corner as well as larger ones that accommodate groups.
Food:
The menu is pretty basic and consists of the standbys--guac, quesadillas, enchiladas and a couple of daily specials. I like that the menu doesn't contain too many choices, which could make ordering dinner a stressful task. Interestingly, all the non 'burgies (Kimberly, Katie and me) got the enchiladas and Viriginia went for the fish tacos. Here's the low down on our dinner:
Chips and Guac: Overall, very solid on both the chips and the guac. The chips were thick and crispy and there was lots of 'em. The guac was semi creamy and chunky which was good--a simple recipe with avocados and onions. It had the right amount of salt which is always important and sometimes overlooked.
Braised Beef Enchiladas: I was a bit surprised to find out that these were more like steak enchiladas than braised beef. When I think of braised beef, I think of soft, shredded dark meat that's silky and creamy. These enchiladas were tasty but definitely steak-like. They were topped with cheese, shredded radishes and cilantro. My favorite part of the dish was the sauce, which I'm assuming was a mixture of cheese and tomatoes. Katie got a chicken variation, which she also enjoyed but commented that she would've loved to see some fajitas on the menu.
Fish Tacos: These are Virginia's favorite and she orders 'em almost every time. They consist of a crispy white fish in two soft shelled tortillas, topped with lettuce, radishes cilantro and a house sauce. While I didn't try them, they looked incredibly fresh and appetizing. Maybe next time...
The Sides: It's sort of a bummer that you have to order these separately but even still, they were delicious. We opted for the sweet plantains and the black beans and rice. Both complimented our entrees nicely and the plantains were a big hit. They provided a dessert-like flavor with the savoriness of our main dishes.
Service and Cost:
The service was good and very prompt. We got to Bonita on the early side and occupied one of its many free tables. However, by the time we left, the place was packed and a lot of people were in fact waiting to be seated. Despite the busyness, we were not bothered to leave. In fact, we felt that we could've stayed longer and kept chatting away. All in all, Bonita was very hospitable.
In terms of cost, it's inexpensive to the naked eye but adds up quickly because all the sides and even the chips are separate. I'm a firm believer that Mexican food should be as inexpensive as possible but that's unfortunately not the case in New York City. Appetizers range from $3-$8, entrees from $7.50-$14 and beers and sangria are $5.
2 Mmmms
Posted by Fooditka