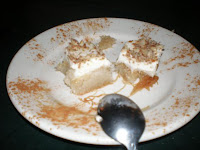 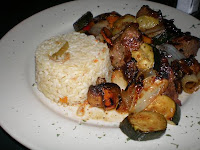 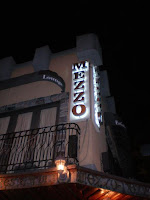 Mezzo Mezzo Restaurant - 31-29 Ditmars Blvd, Astoria, NY 11105
718.278.0444
N/W Train to Ditmars Blvd (last stop)
www.mezzomezzony.com
Mezzo is a longtime Greek staple in the neighborhood. It wasn't our first choice for dinner when on Ditmars--we were actually trying to eat at the well-known Taverna Cyclades but the wait was too long. We settled for Mezzo--and unfortunately endured an evening of culinary disappointment.
Atmosphere:
The wonderful atmosphere is what persuaded us to come here. Outdoor seating is inviting, especially in warm weather and the rustic taverna exterior has a home country feel. The interior is even more interesting--you'll find unique wooden tables and chairs that almost look hand crafted. It kind of resembles a cabin from Goldilocks and the Three Bears, where you never know what you'll discover next.

The crowd at Mezzo ranges from young twenty somethings to older patrons who've been coming here for years. Everyone dresses casual to match the comfortable, homey scene. And you can be sure to hear some beautiful Greek spoken--both by the patrons and the waitstaff.

Food:
Judging by the authentic atmosphere, I thought the food would be spot-on but I was so wrong. Click for menu. We started with a seafood appetizer of stuffed clams. These were filled with breadcrumbs and topped with melted mozzarella cheese, served on a bed of salad. Let me just say that the only good thing about this dish was the salad. The clams were so salty and so fishy that we had to request more pita bread to get the rancid taste out of our mouths.

Next came my lamb souvlaki and Dan's seafood souvlaki. It's a Greek place so how could they mess this up? Lo and behold, they were both disasters. My lamb was too thick and chewy--I had to drink a lot of water to get it down. The only good part about my dish was the white rice--and because I was so hungry I polished it off quickly. Dan's seafood souvlaki was no better. He said the seafood was too salty and tasted unfresh--clearly a bad sign. The veggies and lemon potatoes were to his liking but that could've been his hunger talking.

The only thing that I liked here was the complimentary dessert that came at the end of our meal. It was called "ekmek" (not sure of the spelling) and consisted of semolina cake topped with Greek yogurt and cinnamon. It was light, had interesting texture and tasted fresh. I would certainly recommend it!

Service and Cost:
Despite our disappointing food, the service was impeccable. Our waiter was on-point with every aspect of service--great attitude, efficient, perceptive. He clearly saw that we weren't liking our meal and offered free dessert to lift our spirits--this really scored points with both of us.