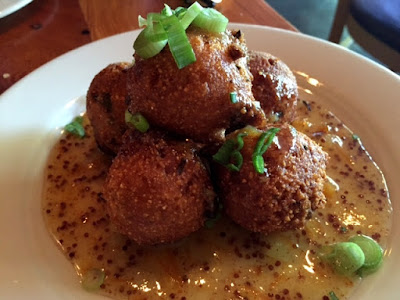 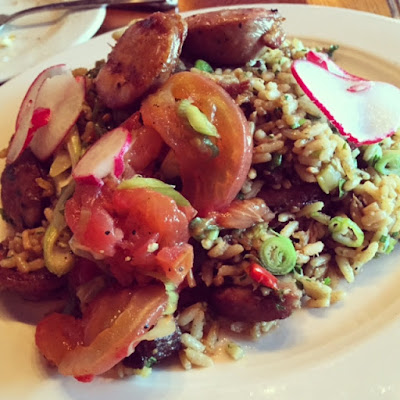 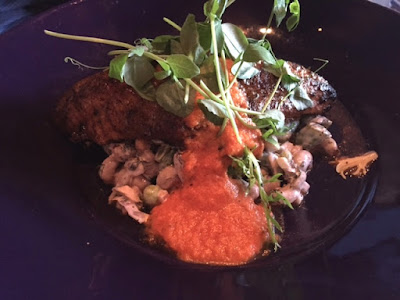 Always up for exploring Cajun food, Dan and I finally had the opportunity to try Acadia in NE Portland's Irvington neighborhood.  Dining there on a Monday evening, we took advantage of their Monday night cheap eats menu, and if you know me personally, you can vouch for the fact that I love me a great deal!

Atmosphere:
Located in a little strip of restaurants and retail shops near NE 13th Avenue, Acadia is a true neighborhood gem, which seems to be populated by locals.  I love the quiet, comfortable vibe, as you see small parties dining there and I'd say it's also a great place for a romantic dinner date.

Although the space isn't large, it's well laid out and anchored by a nice bar in the center.  Right behind that is the restaurant's kitchen and if you happen to sit in the left hand dining room, you'll get a little peek inside.  Because the bar is so significant and very comfortable, it'd be a great option for a single diner to enjoy a nice meal.

Food:
As already mentioned, Acadia is home to some down-home Cajun/Creole eats.  The menu is pretty traditional in terms of seeing your usual culinary suspects, but this is exactly why we came.  We were delighted to see that the Monday night cheap eats featured Creole favorites such as jambalaya, crawfish, blackened catfish and the like.

Green Onion Hushpuppies - We've been needing some hushpuppies in our lives and haven't had them in I can't remember how long.  Acadia's version more than delivered with large pieces of crunchy corncakes that were soft and moist inside with beautiful green flecks of onions.  A sweet orange marmalade served as the base of this dish and offered something surprising and interesting.

Cajun Jambalaya - All I have to say is wow because this jambalaya more than delivered.  Firing on all cylinders, including three types of meat such as smoked duck, chicken and andouille sausage, it was a meat lovers dream.  The veggies that made up the rest of this stew were also fantastic, including the pickled tomatoes, onions and radishes that rested on top.  The portion here is plentiful and allowed me to take a little bit home to enjoy the next day.

Wild Blackened Catfish - This was Dan's dish and he totally devoured it.  Looking more gourmet and sophisticated than I anticipated it to, the fish was seared to perfection, sporting a slightly charred crust.  A side of fresh creamed corn and a spicy red chutney really made the flavors in this dish sing, infusing into it that Southern flava.

Service and Cost:
Because it was an off night, we expected to be served quickly and efficiently, which we were.  However, I anticipate that this well run establishment wouldn't be a disappointment on any other given night either.  Our waitress was kind and easy going, making sure we had everything we needed at all times - so absolutely no complaints.

Costs are highly competitive on a Monday evening, with select entrees being only $12 each.  As I mentioned above, the portion size doesn't suffer, giving you great bank for your buck.  The entire meal set us back under $40 including drinks and tip.