Smaaken Waffle Sandwiches had me at Hallo 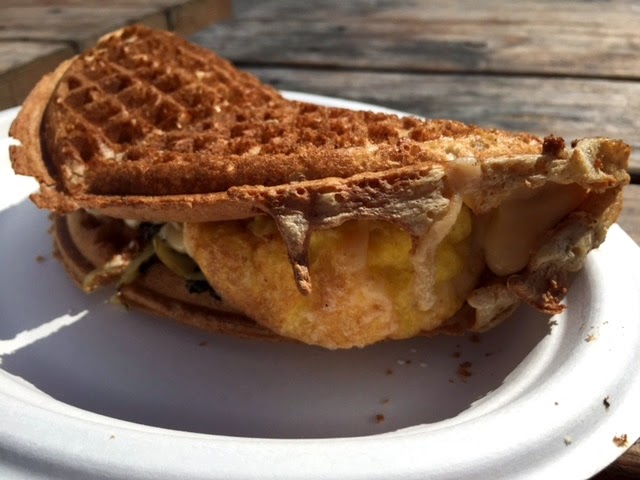 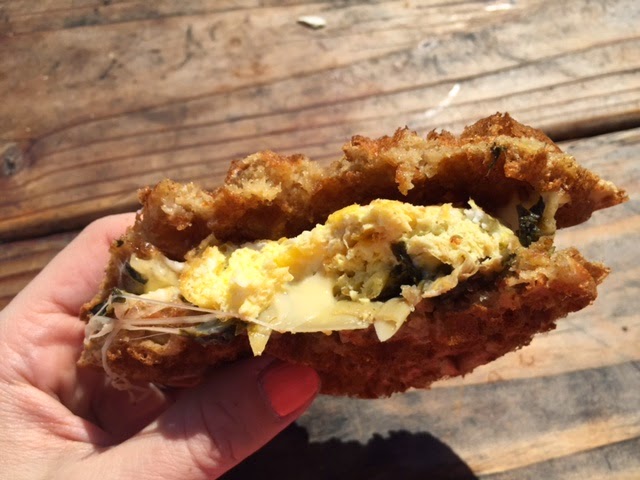 Being that it was such a gorgeous day today and also because we were watching Mo & So's dog, Bond, we decided to hit the food trucks on Division street.  Knowing it'd be a busy time, we still decided to go for it, as it's a great place to come and enjoy a lot of exciting food with a dog in tow.

After circling around the hefty food truck lot on Division St. and 28th Avenue, we got a good sense of the yummies offered that day - and there were plenty.  After spotting a Korean food truck, Dan quickly chose a bulgogi beef platter for his lunch while I went for Smaaken, the Dutch waffle truck.  I'm about to spill the deets about the latter, which I thought was a fabulous choice I'd like to have again.

Smaaken Waffle Sandwiches - Located in a little pod, resembling a quaint Dutch cottage, Smaaken sandwiches are the real deal.  Immediately drawn to its eclectic menu that boasts not only sweet but savory sandwiches as well, there was lots to choose from.  I also liked the pod's location, which is strategically set near the communal tables in the middle so if you are with dog, like we were, it's easy to just hang out there until your name is called.

Sardou Waffle - After much deliberation, I selected a brunchie type of waffle with eggs, gouda cheese, artichokes, steamed spinach and lemon aioli to tie it all together.  The combination was fabulous and unlike any breakfast sandwich I've had--the eggs being perfectly fluffy, complemented by the tangy gouda and the soft lemon artichokes.  Even if you're not a vegetarian, I think you'll appreciate the sophistication and bright flavors in this sandwich.  But before I wrap this up, I must also talk about the excellence of the crispy waffle itself, which served as the sandwich part of this meal.  Not only was it cooked to perfection, boasting a beautifully golden exterior, the interior was airy and light, and didn't weigh you down at all.

Service and Cost:
Compared to some of the other waiting times in the food truck lot today, I think Smaaken surpassed expectations and expedited their orders pretty quickly.  Since everything is made to order, I was impressed by the 5-7 minute completion time for each order.

Costs are inexpensive and include anywhere from $4.50 - $8.50 for a waffle sandwich, depending on the ingredients.