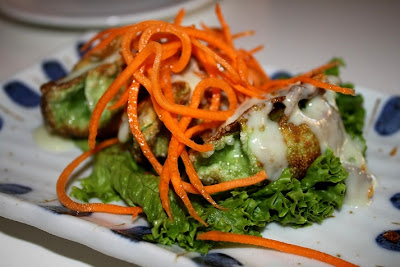 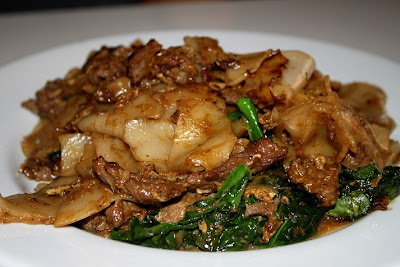 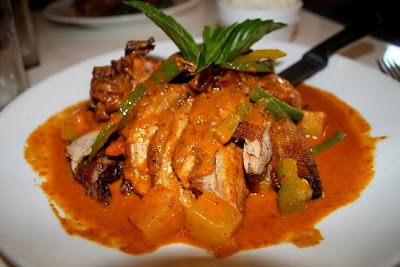 As you may have demised from previous posts, I'm a huge tennis fan and these next two weeks at the U.S. Open are huge for me.  Spending nearly the whole weekend engrossed in tennis, both watching it at home and live, I simply can't get enough.  And even though I love to go visit the Billie Jean King National Tennis Center, I do not love the expensive, fast food they offer.  So instead of eating at the stadium, I've strategically chosen to eat beforehand or brought some good food into the stadium with me.  Going with the former option on Friday night, my friend Edita and I stopped off at LIC's Tuk Tuk for a casual pre-tennis dinner.

Never having been to Tuk Tuk before, I was excited to try it, and also had high expectations, given the nice feedback I've heard about it from fellow residents and other Queens foodies.  And being that I'm a fan of Thai food, I couldn't wait to see what this place offered.  In the end, I was impressed to no end, and will absolutely be back - tennis or no tennis involved.

Atmosphere:
Sporting a casual and modern vibe, I immediately liked what I saw - a plethora of seating in a cheery dining room decked with brown and green bright tones.  The essence of this place felt very urban, very Bangkok (as I imagine it to be), and after some research, I found out that the meaning of Tuk Tuk is actually a three wheeled taxi.  All this made sense and gave the decor more meaning, especially those adorable lighting fixtures with little toy taxis (or tuk tuks) nestled inside of them.

Even though we stopped in at an offpeak time, the restaurant wasn't empty, showing a sign of a healthy, loyal clientele.   I was impressed.

Food:
After a long work day, and at least 4 hours of tennis ahead of us, we were in desperate need of grub.  Sharing an app and then getting our own entrees, we walked out with full bellies and a true feeling of satisfaction.

Edamame Dumpling - As soon as I saw this on the menu, I was intrigued and so was Edita.  The description reminded me of the signature potsticker they serve at JJ's and I was eager to try Tuk Tuk's version, which was fried.  Fried to perfection may I say.  The exterior was delightfully crunchy and the interior creamy and soft with a little bit of bite to it.  The topping of smooth, velvety wasabi cream sauce gave the dish more complexity, as well as the julienned carrots, which added crunchy texture.

Pad See-Ew - This was Edita's dish and as you can see from the above pic, it consisted of fat stir fried noodles mixed with veggies such as Chinese broccoli.  Ordering it with beef, Edita seemed to like it but commented on how filling it was and I suspect, a little heavy too.

Pineapple Duck Curry - As soon as I saw the words "duck" and "curry" in the same sentence, my interest piqued.  And though I had some reservations about this dish in the beginning, it turned out to be outstanding.  First off, the portion was huge, containing large pieces of golden, crispy roasted duck, bathed in a slightly spicy curry sauce and sweet chunks of pineapple.  Even though the sauce had a definite kick, the pineapple helped cool your senses, while the actual duck meat was pure indulgence - with a super crispy skin and a perfectly cooked interior, it tasted divine.  What an absolute must!

Service and Cost:
Generally, Tuk Tuk's service was pretty good and efficient, but nothing overly noteworthy.  There was absolutely nothing wrong with the way the staff acted towards us, but there weren't any special areas of expertise I'd like to brag about.  If I call it standard and reliable, I'd be saying it like it is.

Costs are very affordable and include: