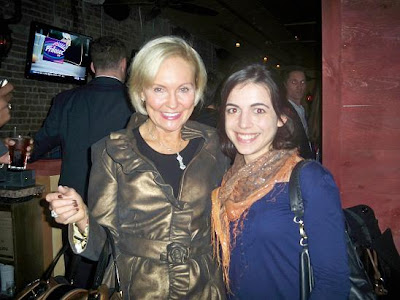 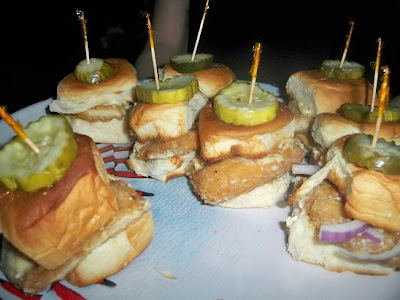 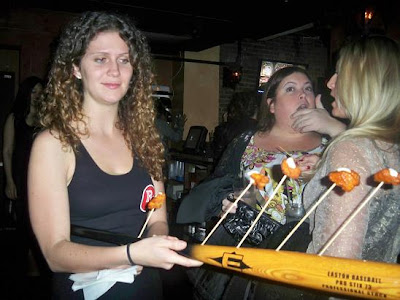 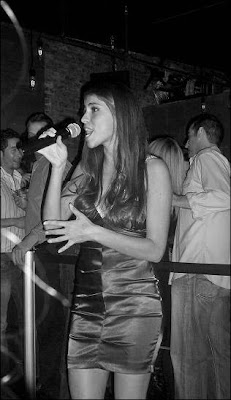 Village Pourhouse – 205 First Street (b/t Park and Garden) Hoboken, NJ 07030
201.792.BEER
PATH Train to Hoboken
www.villagepourhouse.com
As a recent transplant from Astoria>Chicago>Jersey City, I’m learning to appreciate the rich culinary delights the dirty Jerz has to offer. So when the Foodista invited my hubby and me to the grand opening of the Village Pourhouse in Hoboken, I donned my bumpit and prepared to fist pump the night away.
Atmosphere:
We arrived at Village Pourhouse to a long line of patrons anxiously awaiting entry; but luckily, when you’re press, you go right to the front. After a slight mix-up at the door (seriously, who would even think about turning away the Foodista?!) we entered the party through a random side door.

The interior space is configured in a large horseshoe, with plenty of seating and a nice, open feel to this slick, modern sports bar. We kept our eyes peeled, as one paparazzo hinted at the impending arrival of Jersey Reality tv royalty. No sooner than we began gossiping about our fave ladies from Franklin Lakes (Holla, Teresa!) did we run into Kim G. from the Real Housewives of NJ (inside scoop for Foodista readers: you’ll likely be seeing more of her next season). We also spied all the Manzo kids—Albie, Chris, and Lauren—as well as Anthony Lombardi from Jerseylicious, who couldn’t have been more excited to confirm that business is taking off at Anthony Robert Salon. And Antonella Barba, Jersey’s own darling of American Idol Season 6 fame, appropriately treated us to a rousing performance of her new single, “Jersey Girl.” It was a celebration of all things Jersey, indeed.
Food:
The evening’s fare consisted of a variety of passed hors d'ouevres, some of which were pleasantly elevated above run-of-the-mill bar food. The standouts included:
Sliders with Cognac Sauce—These were hefty and two or three could easily comprise a meal for the average bear. These scrumptious bite-size burgers were filled with perfectly grilled patties, caramelized onions and a tangy cognac sauce that really added something special. Deli pickle slices adorned the top of each bun, affording a refreshing crunchy goodness with each bite—yum!
Boneless Buffalo Wing Bites—Skewered and cleverly served from wooden baseball bats, these wings were so irresistible that my hubby must have had at least eight rounds. They had just the right amount of kick and featured a reasonable drizzle of blue cheese sauce, ensuring the proper ratio between the wing and its condiment. Even I went back for seconds, appreciating the boneless presentation and lack of greasiness of these little poppers.
Beer Shooters—As the name "Pourhouse" suggests, we were treated to a number of mid-premium beers, including Harpoon, Magic Hat No. 9, and Blue Moon Winter Ale (my favorite). The full menu boasts a plethora of bottled beauties from around the world, and for those less enthused by beer, a full bar is ready and waiting.
Cake from Carlo’s Bakery—Though the Buddy the Cake Boss couldn’t be there himself, Carlo’s Bakery (located just a few short blocks away) sent a stunning slider-themed specialty cake to commemorate the evening.

After lighting sparklers to elevate the festivity, we literally.stalked.this.cake.around.the.bar to ensure a taste of the stuff of legends. We received interior slices of a vanilla-chocolate-vanilla cake, with thick slathers of chocolate mousse frosting between each layer. The interior icing approach was a great idea in theory, especially since the exterior fondant had been trimmed away. However, we all felt the heavy icing overwhelmed the cake itself, which was also extremely dense (perhaps the robust consistency is needed to support the usually elaborate decorative elements?) Carlo’s cake was good, but certainly can’t top my favorite bakery (love that lemon cake from Minooka Bakery in Scranton, PA). Perhaps a little less frosting would create a better balance.
Service and Cost:
Since this was a launch party, we were treated like Jersey princes and princesses to a complimentary bounty of passed munchies and beverages. The waitresses were incredibly friendly and hospitable, even chasing my husband down when they were able to secure his precious Magic Hat shooters. The full menu contains a wide variety of appetizers, burgers/wraps, and pub-style wings, most of which are helpfully paired with delectable specialty brews.
A prime spot for large-group sports spectating and even company gatherings, prices are reasonable:
Salads and Appetizers - $6-10, $15 for a platter
Burgers - $10-12
Sandwiches and Wraps - $7-12
2.5 Mmmms
Thanks for having us, Foodista!!
Posted by Fooditka