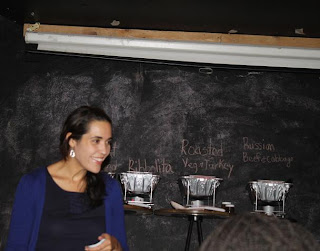 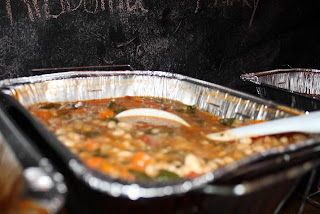 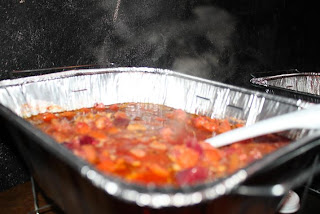 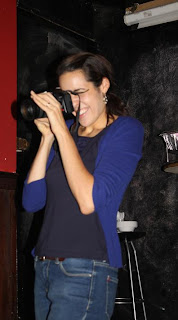 Soup! It's a beautiful thing.  A big part of my Eastern European heritage, soup is indeed in my blood.  It's what I ate each day when I was a kid.  My family and I would sit down to our daily 3-course lunch, and we'd always have soup before the main course and dessert were served.  It's something my dad still can't live without, even after 21 years of living in the U.S.  Ahhh...soup.
So needless to say, when I received an invitation from a fellow blogger, Serena from the cleverly named, Seriously Soupy blog to celebrate her baby (as in blog of course) turning the big "1," I knew some great soup would be involved.  Bo came along, as she's often my food partner in crime, and we enjoyed a fun evening, brimming with all kinds of soupy activities.

The Venue:
Just as excited as I was to taste all the soups, I was also looking forward to checking out the party's venue, Jimmy's No. 43.  A well-known gastro-pub in the East Village, they carry a big selection of micro-brews, international as well as local wines, and some unique local food.  They hold food and drink pairings quite often, and I'm dying to check one of them out real soon.

Serena's party was held in a private room towards the back of the main bar.  It was nice that the space was set up restaurant-style with a bunch of small tables, topped with a bowl of crusty bread and olive oil - in preparation for some serious soup consumption.  A small stage area in the front of the room served as the showcase for Serena's delectable creations.

The Soups:
And now on to the main show-stopper, which of course was the soup.  There were four kinds including Ribollita (Italian bread soup), butternut squash and carrot, roasted root vegetable and turkey stew and beef and cabbage stew.  A "mystery creation" also made a debut, which turned out to be parsnip apple soup, but I just didn't have any more room for it.

All four soups were absolutely delicious but these 2 stood out to me the most.

Beef and Cabbage Stew - Maybe it's the Eastern European in me, but I love my cabbage.  Not only was this soup hearty from the tender chunks of beef that just came apart, but it also had a tinge of sweetness from the cabbage.  Since it was so filling, it can very well substitute for a full meal - all you'll need to add is a big piece of crusty peasant bread.  Just soak it in there and you got yourself a make-shift Russian Ribollita.

Butternut Squash and Carrot Soup - A close second in terms of flavor, this soup had it all - a hint of fall, sweetness and great texture.  It was nice to end Serena's soup tasting with this because in a way, it felt like dessert.  And since it wasn't too creamy, this soup was pretty light, giving it that bottomless quality.  Here's the recipe if you'd like to try it at home.

Besides all the amazing eats at Serena's Soup Bash, she engaged us further by organizing fun soup games.  We took a pop quiz, which tested our knowledge on the history of soup (I failed miserably) as well as a team soup activity, during which we picked a random bunch of ingredients and had to figure out how they'd constitute a soup.  Each team picked a clever name for their soup and ours was complicated albeit catchy, Mrs. Ho's Super Yum-Yum Secret Sausage Soup.  Chew on that...*Gulp.*
Posted by Fooditka