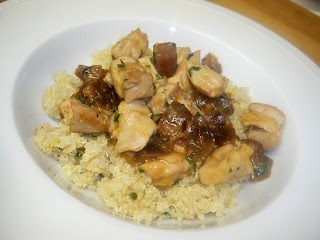 I've been eating out a lot lately and that sometimes makes me feel bad because I hate to neglect cooking.  Last night though, I was back at it again, in my nice new kitchen, trying out a new Apricot Chicken recipe.  It was good because I had most of the ingredients on-hand including boneless, skinless chicken thighs, fresh herbs, aged balsamic vinaigrette and lemon.  The only thing I bought at the grocery store was some low sodium chicken stock and dried apricots.  Initially, I wanted to use fresh ones but then decided to stick to the recipe since I can use the remainder of the dried for other things such as baking or putting into my morning oatmeal.  Mmmm....I love it when they get all soft and chewy and melt into the hot oats. I digress...

The following Herb-Apricot Chicken dish came from an old Rachael Ray recipe, which I normally don't love because of the myriad ingredients needed - but this one was actually simple.  The only time-consuming thing was cutting up the chicken and removing the fat.  However, if your protein is nice and lean, you won't run into that problem.

If you love the idea behind this recipe but don't want to use chicken, I don't see a problem substituting other protein such as lamb or beef, which could be lovely with the sweet apricots as well.  Use your creativity and have fun.  I cooked up some quinoa to soak up all those yummy chicken juices and threw in some fresh chopped parsley and lemon zest for extra zing.
Enjoy and do let me know how you liked it, or if you have other suggestions for changing it up.