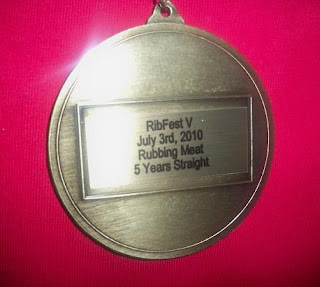 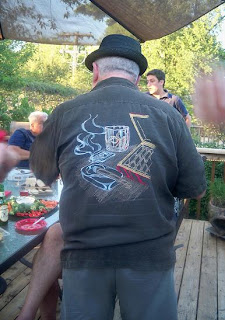 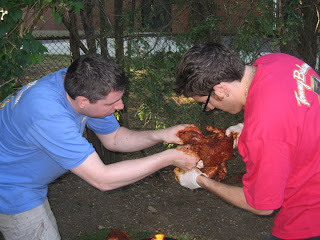 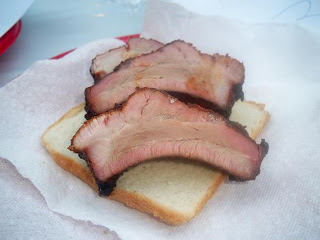 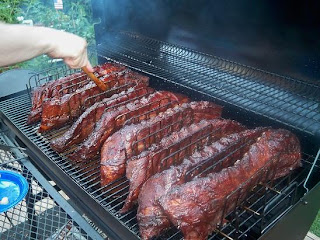 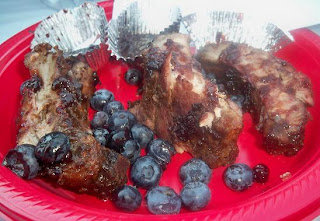 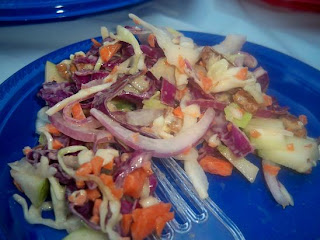 This past weekend was our friend Adam's and his family's legendary (and annual) Ribfest celebration.  While last year's shin-dig was quite the bonanza, this year the Meyers' kicked it up another notch with more guests, drinks, some fancy serving staff and of course more ribs!  It was, as always incredible and the Meyers' sure know how to throw a partay.  Whether a Ribfest newbie or veteran, there was no choice but to feel right at home and as part of the crew.  I learned this credo last year and returned to the event this year with an honorable task - as one of the judges.

The Competitors:
Five fierce competitors entered the rib competition this year including our friend Adam, Tom, Uncle Bobby, Dave and Bob.  Even before I go into the critique below, I have to say that the showmanship of every single rib was intense and super impressive.  Every competitor took great care and pride in their ribs and really made them their own.  The love that went into each and every plate was evident and it was not only a pleasure to admire but pure gluttony and sloppy bliss to eat.

Adam - I'm not just saying this because Adam is our friend, but he's always the most avant-garde competitor. Last year he used Coca-Cola on his marinade and this year, he brought everyone's tastebuds to attention with his spicy jerk rub.  Each bite of his ribs provided a sharp explosion of flavor that set you over the edge, and the pieces of meat separated perfectly from the bones, without getting overcooked. It was pretty awesome and I, along with my other 2 fellow judges really appreciated the texture perfection. Kudos Adam!  For those of you interested in how to make Adam's spicy jerk rub at home, here's the recipe that he graciously provided.

Mix all the ingredients and keep it on a dry place.
Rub your homemade jerk rub over tofu, fish, chicken, pork or seafood.

Tom - Also a fierce competitor, Tom is constantly reinventing his ribs and especially his marinade.  Although this year's marinade was similar to last year's, using chipotle peppers, honey and a ketchup-based sauce, Tom kicked it up a notch by incorporating a top-notch bourbon called Woodford Reserve.  Overall, I enjoyed his marinade very much but the texture of the meat was a bit soft and needed some more time to cook.  Tom recognized this and used the remainder of the night cooking these babies to perfection.

Bob - Bob's ribs looked really different than the rest because they were a lot smaller and in fact, they were almost bite sized. The marinade he used reminded me a little bit of Tom's in that it had a hint of sweetness but differentiated itself in that it wasn't as spicy. I wouldnt've minded a tad more spice but overall, these ribs were also very delicious and their friendly size enabled you to munch on them easily and quickly.

Uncle Bobby - I can't lie, this jolly man is one of my favorite competitors because he puts every ounce of energy into this competition and it shows.  He's expressed to me that cooking is his true passion and he experiments with different recipes all the time.  His wife does the recipe researching and Bobby just "messes with ingredients and changes things around" as he says.

For his Ribfest entry, he put together a sweet rib with a spicy blueberry glaze, as well as a blueberry reduction on the side.  I was so impressed by this plate from the beginning that I just couldn't wait to dig in.  It looked like a really appetizing piece of meat and the blueberries just made it look so summery.  Overall, it was awesome and pretty innovative too. I could've done without the extra blueberry glaze but the sauce that was on the actual ribs packed a mean punch and a hint of sweetness at the end too. Great job Bobby!
Dave (THE WINNER) - The minute I saw this pale-colored, simple looking rib, resting on a few pieces of white Wonder bread, I was unimpressed.  The presentation was so ordinary and unexciting that I wasn't as enthralled to dig in as with the others.  But...once I did, I knew why this man was in the competition.  He knew his ribs.  In fact, he'd mastered them.

The dry rub on the outside was perfectly nestled into the tender pieces of meat and each bite produced the perfect combination of spice, smokiness and char.  All three of us judges agreed that the texture was superior to none--the meat separated perfectly from the bones and it was a pleasure to pick a apart.  It came off the bones so easily and neatly in fact that no part of this amazing rib was wasted.  We licked the bones clean and even scraped up any bits that were left with the white bread.

It was clear to us why this man was the winner - he went simple on the presentation but went balls to wall on taste.  A proper bow and dusting off the shoulder is in order here.
All competitors received medals that you see above, with the clever slogan, "rubbing meat 5 years straight." Everyone wore them proudly as a badge of honor that each person rightly earned through their exemplary cookmanship.

Other Noms Worth Mentioning:
Besides all the finger-lickin-good meat, let's not forget about all the amazing sides that graced this year's Ribfest.  For a lot of these, Randi was the mastermind, producing delectable side dishes such as her famous mac 'n cheese, jalapeno cornbread, coleslaw and more.  Everything was truly excellent but my clear stand-out was the coleslaw, which had a unique spin to it.  Besides just the usual suspects such as cabbage, carrots and onions, Randi's colorful coleslaw also incorporated hints of summer such as apples, lemon juice, walnuts and a really light mayonnaise based binder that had the right amount of creaminess and zest. There's no other way to say it - you hit it out of the park, Randi.

The evening wrapped up with a smorgasbord of desserts such as Ralph's Ices, my blueberry squares, a big chocolate cake and other goodies, all of which were big hits.  People continued to party and enjoy themselves until late in the night--another home run for the Meyers' and their friends.  I tip my hat to this wonderful family for another job well done.

And now comes the hard part - waiting until next year when we do it all over again.
Posted by Fooditka