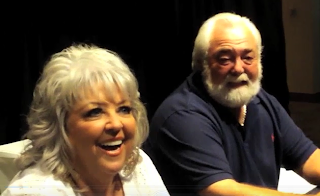 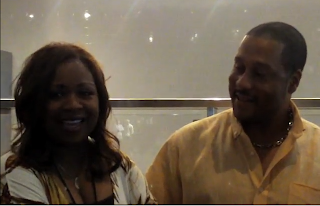 After my interview with Food Network's Sandra Lee, I was pretty much on cloud nine because not only did I get to meet one of my favorite Food Network personalities, but I also got some great press out of it.

This past weekend however, delivered more high-profile food interviews, as I got to speak with some of my favorite Down South cooks - the Mama of Southern Cooking herself, Paula Deen and the adorable BBQ-lovin' couple, Pat & Gina Neely from Neely's BBQ and the show, Down Home with the Neelys.  I also met with the Ace of Cakes, Duff Goldman and his creative team from Charm City Cakes, but I'll save that for my next post.

What's the Occasion?
The interviews were held at this year's Great American Food & Music Festival, which aims to showcase the best regional food throughout the country.  In addition to the talent I mention below, you had restaurants from all over the country, featuring signature dishes that put them on the map in their particular market.  Restaurants such as:

Both Paula Deen and the Neely's had the most wonderful energy and had the infectious power of electrifying the room as soon as they came in.  And after speaking to them on a one-on-one basis, I was duly impressed by their enthusiasm, sense of humor and sincerity in answering my questions.  While the Neely's were more playful and jovial, Paula's interview was heartfelt and inspirational.  It really gave some insight into her soul and how she's gotten where she is today.  Oh and don't worry, she answers some questions about butter too!
Paula Deen Interview
The Neely's Interview
Posted by Fooditka