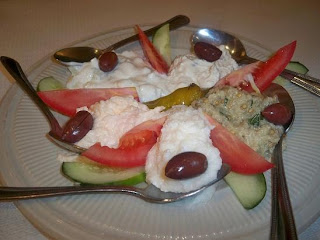 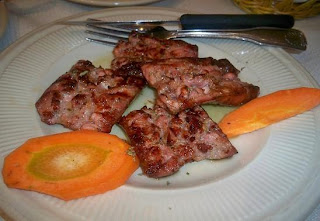 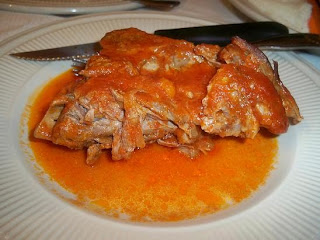 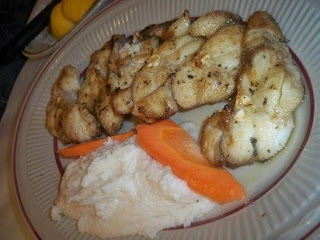 Bahari Estiatorio - 31-14 Broadway, Astoria NY 11106
718.204.8968
N/W Train to Broadway
www.bahariestiatorio.com
On many occassions, I've been hearing effusive praise about Bahari Estiatorio, some people even declaring it as the "best Greek restaurant in Astoria." That of course piqued my interest and raised my expectations immensely.  And after a visit a couple of weeks ago, I can't exactly say that they were completely met.  While I did enjoy my experience, Bahari hadn't outperformed my ultimate favorite Greek restaurant, Taverna Kyclades.

Atmosphere:
The space is used quite well, as you walk into a narrow area, which doubles up as a kitchen and a proud display of the fresh seafood they have to offer.  This nook then leads to a large, rectangular dining room that's crisp white with thick nautical ropes suspended loosely from the ceiling.  A mix of these modern and rustic features give off a very cool vibe, making you feel like you're in a Mediterranean village, getting ready to embark on an unexpected culinary adventure.

Aside from the main dining room, there's another spacious squarish room off the to left, which feels like an ultra modern and somewhat disjointed addition.  Although it didn't seem to quite fit in with the rest of the space, it was pleasant nonetheless and also just as lively as the main dining room.  This is where we sat and our table allowed us to observe both what was going on here and in the main dining room.

Food:
The cuisine at Bahari consists of traditional Greek fare.  I was excited to see all my favorites on the menu including a variety of cold and hot meze.  We decided to be adventurous, ordering both expected and unusual items such as baby shark.

Krya Pikilia (Assortment of Spreads) - Greek spreads such as tzatziki, spicy feta, eggplant, fish roe and potato/garlic are some of my favorites to get in Greek restaurants.  And sampling platters such as the one we ordered here are a great way to try them all.  This was the best part of the entire meal for me, as I got to indulge in all of these dips, spreading them on the nicely warmed pita that was served alongside them.  The presentation was lovely, each dip separated by a juicy slice of tomato.  I loved using the tomato as a dipping tool and also enjoyed the meaty kalamata olives that decked the plate further.

Loukaniko - We were curious to sample Bahari's rendition of this typical Greek meze.  Yum! We weren't disappointed with the thick pieces of finely grilled sausage that had a very tender inside.  I liked the earthy oregano that was mixed into the meat and really made the flavors in this dish sing.

Arni Kokkinisto - Being that we were in a Greek restaurant, we just couldn't skip the lamb, and we ordered the baby lamb loins cooked in hearty tomato sauce.  I liked how tender and juicy the meat was and how it fell apart upon contact.  A big lover of braised meat, I was definitely digging this dish and used some left over pita to soak up the sauce. If you love lamb, I'd suggest this and especially because it's very different than the usual gyro.

Galeos - This was our baby shark plate, which came with a side of skordalia (potato/garlic dip).  Although we were curious and enthusiastic to try it, its taste was disappointing, which had a lot to do with its rubbery texture.  Unfortunately, it just wasn't what we were expecting and had a slightly funky fish taste that we didn't care for.

Dessert - As is the case in most Astorian Greek restaurants, we received complimentary dessert, which was a small piece of semolina cake.  I can't say that I always enjoy these but Bahari's version was absolutely divine, with a soft light interior, zinged up with cinnamon and some delicate rose water.

Service and Cost:
Despite it being a busy Friday night and given that the restaurant was full, service didn't suffer.  We received just the right amount of attention from our waiter and he seemed jovial and interested in giving us a good experience.  He wasn't afraid to voice his opinion about the food, telling us at one point that we wouldn't like the loukaniko.  This encouraged us to get it of course, and after he saw how much we enjoyed it, he seemed slightly amused by our adventurous tastebuds.

Costs are moderate for pretty solid Greek cuisine and include: