Pomme Cafe - Cozy but Food Left Something to be Desired 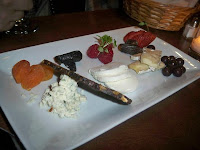 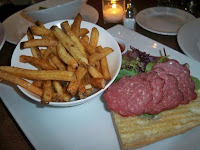 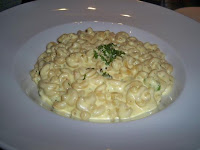 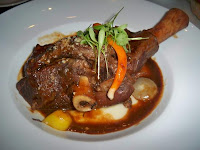 Pomme Cafe - 37-19 Broadway, Astoria NY 11103
718.545.4301
N/W Train to Broadway
http://www.pommecafeny.com/
My curiosity has been killing me about Pomme Cafe, and after much rescheduling, Meg, Mackenzi and I finally checked it out for dinner.  While my initial impression was great--the space was very inviting--the food wasn't anything to brag home about.
Atmosphere:
From the minute I walked in, I liked the interior - a warm, cozy yet open space with a great bar area and plenty of eclectic seating.  Smaller tables for two or four line the perimeter of the restaurant, while larger, communal tables are found in the middle.  I like that the tables are spaced apart enough so you don't feel like you're sitting on top of anyone, or eavesdropping on a conversation.
The lighting is dim and the decor is sort of hodge-podgy - a variety of pictures and oversized mirrors deck the walls.  There's even a huge wall of wine towards the back, which I admired.  The clientele seems young and so does the staff, meaning that it's far from a stuffy French restaurant.  On the contrary, it's a cool and very approachable bistro.
Food:
Everything on the menu sounded excellent, offering a mix of classic French hors d'oeuvres, sandwiches, salads and warm entrees.  I saw a lot of my favorites including escargot, mussels, croque monsieur - so needless to say, I was excited.  However, while some of the dishes were good, others were forgettable and left something to be desired.
Artisanal Cheese Plate - Meg and I started with a nice assortment of artisanal cheeses, which included brie, blue cheese and goat cheese.  I loved the selection and it provided a perfect pairing with our full-bodied red wine.  The plate was dressed with fun accoutrements such as dried apricots, raspberries, dates, grapes and a crispy dark-bread crouton.  It was a generous serving for two people and we could've very well split it with a third. I was impressed and definitely recommend this.
Braised Lamb Shank - Lamb is one of my favorite proteins to order when dining out and when I saw they offered a braised lamb shank, I was sold.  I know that while braised meat almost always produces good results, this one wasn't executed well.  The cut of meat was quite fatty and there was only a slim portion that was tasty.  But the most disappointing part of the dish was the side of vanilla mashed potatoes.  Although it sounded exotic and inventive, the vanilla flavor was too predominant and it just didn't work for me.  I would've much rather preferred something simpler and classic - no vanilla needed.
Other Dishes - Meg ordered the port cured salami sandwich and a tomato soup.  She said that the sandwich was quite good and she was satisfied with the quality of the salami.  On the other hand, the soup was just OK, nothing special and probably unnecessary to get next time around.
Mackenzi went with the macaroni gratinee (aka mac n' cheese) with gruyere cheese and mornay sauce.  She liked it but remarked that it was a touch heavy and rich.
Service and Cost:
I can't give too much credit to our waitress - it was apparent she was very "green" but besides that, her tableside manner was really awkward.  We had a couple of strange encounters with her and it was apparent she didn't know much about the menu or food in general.  Her comment about my braised lamb was, "how would you like that cooked?" I know I'm being harsh but come on...you work in a restaurant, you should at least know a little bit about food preparation.
Costs are moderate and if I return here next time, I might stick to an all veggie selection:
Appetizers: $7 - $16
Sandwiches: $7 - $11
Entrees: $10 - $21
Dessert: $6
1.5 Mmmms
Posted by Fooditka