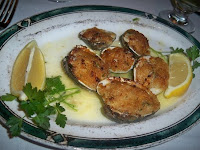 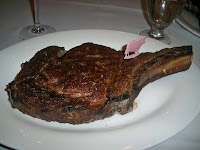 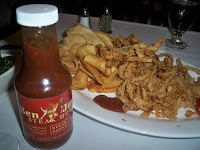 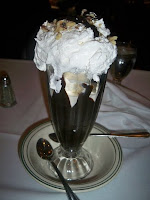 Ben & Jack's Steakhouse - 255 5th Avenue, New York NY 10016
212.532.7600
R/W Train to 28th Street
www.benandjackssteakhouse.com
I love steakhouses and like most people, I consider them to be special treats.  The exprience is one of indulgence and pampering, so when I got invited to a tasting at Ben & Jack's Steakhouse, I got right on it.  Dan accompanied me of course, as he's even a bigger steak fan than I am.  Our experience was a great one, and due to more reasons than I can name, I'd highly recommend this venue for your next steak dinner.

Atmosphere:
Although Ben & Jack's doesn't necessarily distinguish itself from other steakhouses in appearance, it's very inviting, warm and cozy.  The space is open and slightly on the narrow side, which makes it intimate.  A casual vibe prevails and although you can come here straight from the office in your work clothes, a casual outfit of jeans and a nice shirt won't look out of place.

I liked the bar in front, which feels very masculine with tall, handsome barmen who know how to fix a nice scotch on the rocks.  We were surprised to hear a bit of contemporary music in the background, which is often hard to notice in steakhouses because they're so loud.

Food:
The food surpassed our expectations - but mainly the steak.  Although there was an option to share a steak for two, Dan and I both went for the ribeye and got our own personal portion, which was huge.

Appetizers - We took two different routes - Dan got the French onion soup, while I ordered the baked clams, a personal favorite.  I preferred the clams as they tasted fresh and buttery, topped with a crispy crust, which we spritzed with a generous amount of lemon.  The clam meat was plentiful and tasted just like it should - like the sea.

Dan's soup was tasty too but a bit on the salty side. I'd skip this next time and get something seafoodish like the crabcake or the shrimp cocktail.

Steak and Sides - This was hands-down the best part of the meal.  We both ordered our own ribeye steak, cooked medium-rare just the way we like it.  Dan made a comment about whether it would deliver because in the last two steakhouses we visited, he had to send the steak back.  Not here - it was cooked to perfection and the sizeable piece of meat was sizzling with a generous helping of hot butter on top.  Wow, was it good!  The meat was tender and had great marbling, which created the most amazing taste in your mouth.  I kept cutting off the little chunks by the bone because those were the best, and slightly crunchy.  The entire steak impressed me and I'm going to confidently say that I liked it better than at Peter Luger's.

Our sides were yummy too but compared to the steak, they didn't stand out as much.  The 1/2 cottage fries 1/2 onion rings combo intrigued us and to round things out, we also got a side of creamed spinach.  I had a strong preference for the spinach, which was decadent but also earthy - the cream wasn't overpowering and therefore not heavy.  The fried combo plate was good because it was fried but I probably would get something lighter next time.

Dessert - Dessert couldn't be skipped and we decided on Ben & Jack's signature hot fudge sundae, aka The Holly Bull.  It was similar to what we got last year at Peter Luger's but I liked this one more.  The whipped cream or schlag was homemade and super light.  Unlike the one at Luger's, it was easier to get through and to evenutally dip your spoon into the dark, rich chocolate fudge and ice cream.  There were walnuts interspersed throughout the cup, which gave the dessert nice texture.

Service and Cost:
There was nothing to complain about in the service department.  The minute we walked in, we were greeted warmly by a hostess and then were more than taken care of at our table.  Our waiter was a nice guy who was a straight shooter - what you saw is what you got.  He seemed to know a lot about the food and even joked with us for getting that big sundae.  It was cool because we got to meet "Jack" as in "Ben & Jack."  He was nice and hospitable and ensured that we were comfortable.

Prices are comparable to other city steakhouses - and as I mentioned, going out for steak is usually a splurge.  Consider it for Valentine's Day this Sunday, for a special birthday dinner or for any kind of celebration.