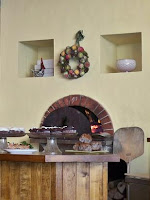 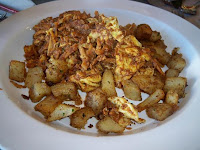 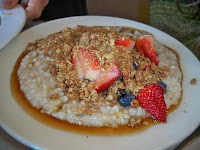 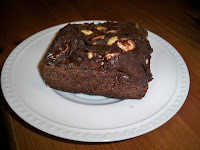 Sage General Store - 24-20 Jackson Avenue, Long Island City NY 11101
718.361.0707
E/V/G Train to Queens Plaza
www.sagegeneralstore.com
This weekend I drove to Long Island City to have brunch with my cousin/Guest Foodista, Vicky and her boyfriend Eric. We planned to explore the Sage General Store because we found out that they now serve brunch. Everything sounded delicious and what attracted us to this place was its wholesomeness--pretty much all ingredients they use are organic or local.
Atmosphere:
Like its name suggests, The Sage General Store is indeed set up like a store rather than a restaurant. There are a couple of impromptu tables set up on the left, where you could sit down and enjoy a light meal. There is no wait staff--what you do instead is holler your order to the friendly servers at the counter or you could go up to the counter yourself, which we did.
The decor at Sage is lovely and nostalgic. Rustic artifacts embellish the space and make it feel homey. Old bowling pins, fishing boots and even a large iron hook are just some of the things that you'll see when looking around. There's a large brick oven positioned to the right of the tables, where the pizza is made. This area was especially interesting to me because it's also where the desserts were displayed--trays of beautiful frosted cupcakes, fudgy brownies and chunky pecan bars were all calling me to come hither.
Food:
Looking at the brunch menu, I saw that Sage offered simple, yummy-sounding dishes. Even though I was intrigued by the variety of sourdough breakfast pizzas, I was really in the mood for eggs and will have to come back to try the pizza another day. The goods that we sampled included:
Cirilo's Migas - Nicknamed the "best brunch dish ever," I had to see what it was all about. Eric tried it as well, and we were both curious about how it would measure up to its claim. The dish included organic scrambled eggs with ancho chile sauce, jack cheese and thin slivers of corn tortillas. It was surrounded by Sage's signature crispy hash, which was delicious and made the dish even more filling. While it had good spice to it, it wasn't too hot and I nearly finished the entire gargantuan portion. Eric seemed to like it as well and almost licked his plate clean. What stood out to me the most were the tortilla chips--a little crispy around the edges, they were infused with zesty ancho sauce.

Steel-cut Oatmeal - Vicky went for the healthier breakfast, with a heaping bowl of hot oatmeal with brown sugar, Vermont maple syrup and plenty of fresh berries. Even though it was simple, it was tasty, as it used good quality ingredients. I tried a spoonful and agreed that the oatmeal was bad ass--I especially loved the fresh strawberries and blueberries. They didn't even taste out of season and I wonder where they got them from.

Rocky Road Brownie - Although I was full after my meal, there's always room for dessert. I bought a Rocky Road Brownie to go and split it with Dan later that day. While looking forward to it, I was unfortunately disappointed after trying it. The fudge that it was topped with was wonderful and not too sweet but there were too many peanuts on top and not enough marshmallows. The dough was way too sticky for my taste and was disappointingly dry around the edges. I wouldn't recommend it and would try a cupcake next time.

Service and Cost:
Although there isn't any formal waitstaff, the servers at the counter are wonderful. They're friendly and welcoming and talk to you like they're your friends. Quirky and spunky, they add personality to this neighborhood gem that makes you want to keep coming back.

Despite boasting organic ingredients, Sage remains an affordable establishment. All brunch dishes range between $9.95 - $12.95 and some even include coffee or tea. If you decide to get lunch, a sandwich will cost you between $6.95 - $8.95, whereas dinner will set you back no more than $14.95